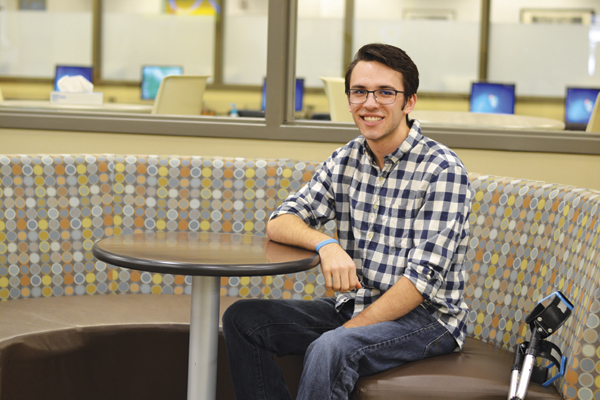 Niles’ Caiden Baxter is never one to shy away from a challenge.
Since he was a toddler, Baxter has devoted himself to competitive sports. He was not even 3 years old before he started to play baseball, and, in the years that followed, he had done everything from swimming to basketball to biking to track and field — “pretty much any sport,” the teenager said.
“I really like being active,” Baxter said.
When he is not active, he enjoys some good-natured competition. While relaxing on his couch in front of his Xbox game console, the 17-year-old enjoys playing the team-based wartime shooter “Call of Duty,” or “Fortnite,” a game where players fight against one another to become the last person standing.
Baxter pushes himself in the classroom as well. He took his first college course while he was in eighth-grade — English 103, he said — and is currently dual-enrolled at both Southwestern Michigan College and the Berrien County Math & Science Center, which is located on the campus of Andrews University in Berrien Springs.

“I wanted a challenge,” Baxter said when asked why he tested into the college-level program.
For more than a year, the Niles teenager has been tackling his largest obstacle to date: to walk once again, without the assistance of a walker or cane.
Since suffering from a spinal cord injury in October 2016, Baxter has spent countless hours in rehabilitation. Though he still has a way to go before he is back to the condition he was in before his accident, with the support of his friends and family, the teenager has made tremendous leaps and strides over the past year — including defying doctor’s expectations that he would never escape the confines of a wheelchair.
It was on a cornfield outside Niles during the afternoon of Oct. 14, 2016, when Baxter’s life changed.
While hanging out at his friend’s place, the two decided to drive around the property on a couple of four-wheelers, so that Baxter could check out some of the cool spots on the property, as it was his first time coming out there, he said. Though they were riding pretty slowly, between 10 to 15 mph, Baxter was not familiar with the terrain, and did not notice a drop-off between the field and nearby dirt road until it was too late for him to stop.
Though he slammed on the brakes of the four-wheeler, Baxter flipped over the handlebars of the vehicle and crashed to the ground several feet below. At some point in the tumble, a portion of his spine was crushed, causing him to lose feeling in his legs, Baxter said.
“When I went to grab my phone to call someone, I couldn’t feel my hand on my leg,” Baxter said. “It freaked me out for about 60 seconds.”
In spite of his fears, and the intense pain he felt throughout his upper body — “like his back was coming through his stomach” as his mother, Lori, said he described it — Baxter managed to call his parents and tell him that he was laying in a cornfield, paralyzed from the waist down.
“I was shaken,” Lori said, when describing how she felt listening to her son on the other end of the line.
His parents managed to beat the ambulance out the property, with Lori staying by Caiden’s side during the ambulance ride to South Bend Memorial Hospital. Even with his mother’s comfort, the teenager said he accepted that he was completely paralyzed — something doctors at the South Bend hospital believed as well, telling he and his family that his spine was completely severed following an examination, meaning he would never walk again.
However, the first signs of hope came while Caiden was being transported via helicopter to IU Health Methodist Hospital in Indianapolis.
“I felt my knees burning on the helicopter, so we knew it was not a complete injury,” Caiden said.
“When he said his knees were burning, I started praying,” Lori recalled. “At the end of my prayer, I pictured a man and woman for some reason, though I had no idea why. When we arrived in Indy, they [the pair I envisioned] were part of his medical team. It gave me complete peace about what was happening. It completely took away any fear that I had that he wouldn’t walk again. It was probably the first time in my life where I felt that God was right there.”
Shortly after landing, Caiden was taken into surgery.  What was supposed to be a five-hour procedure was completed in less than four, Lori said. While her husband was worried when the family was told that the surgeons had done everything they could do, Lori said her experience on the ride over gave her complete confidence that things would work out.
This confidence did not shatter when Caiden was admitted into Mary Free Bed in Grand Rapids to begin rehabilitation shortly after his procedure. Lori was told by one of the facility’s doctors shortly after Caiden’s arrival that if he “had 100 Caidens, that 95 would not move forward in recovery, and only five of them would,” Lori said.
“After he told me, I just said ‘OK,’” Lori said. “He said, ‘I don’t think you understand what I’m saying,’ and I told him, ‘I do. You just told me that my son is 1 in 5.’ I knew that [Caiden] was going to get better.”
In spite his fears of never walking again right after the accident, Caiden himself was determined to walk again after he started his rehabilitation. He began spending four to five hours a day in physical therapy, often scheduling extra hours with therapists whenever he could to further his progress.
“He had a choice to put forth a great effort, or to lay in bed and be upset about things,” Lori said. “I was proud to see him choose to work.”
Only a few days after his admission into Mary Free Bed, Caiden was able to stand once again. On Nov. 13, he took his first steps since his accident, with assistance of some parallel bars, he said.
By the time he left the rehab center, he could walk 2,000 feet in one stretch with the assistance of a walker, he said.

Caiden continued to make strides in his recovery after returning home — and was, between rehabilitation exercises, able to make up three and half months’ worth of school work, he said. Though he initially told his mom he was just going to relax and “become a hermit” for the winter, his parents kept him motivated to continue his recovery — his mother would often place his phone across the house and send him text messages, just to get him to get off the couch to answer it.
“I haven’t taken my wheelchair out of my house since May of last year,” Caiden said. “Everywhere I go, I’m walking.”
In addition to exercises — and the rigors of getting to school and back several times a week — Caiden and his family have traveled to a specialized rehabilitation center in California twice in the past year, where he spent several hours a day during his stay doing activity-based workouts, often working without leg braces, he said. He also joined a wheelchair-based basketball team, River City Rollers, which he has practiced and played games for since December 2016.
“It was exciting,” Caiden said about joining the team. “I love being active, and I love competition. It was cool to be able to do that [play sports again]. Not to brag…but I’m pretty good at it. It’s pretty fast paced and intense. I love it.”
In spite of his tremendous progress, Caiden said some days are still a challenge. Thankfully, his family, friends and the greater Niles community is always there to support him, and keep him motivated to push forward.
Knowing that many have found his courage and determination inspirational has also been a huge drive for him to keep making progress in his recovery, he said.
“It’s a lot easier to keep pushing forward when you know you have a lot of people there to support you, and who are just as excited for your recovery as you are,” Caiden said.

Photography by Emily Sobecki and provided