Local jail ministry transforming lives of those in need 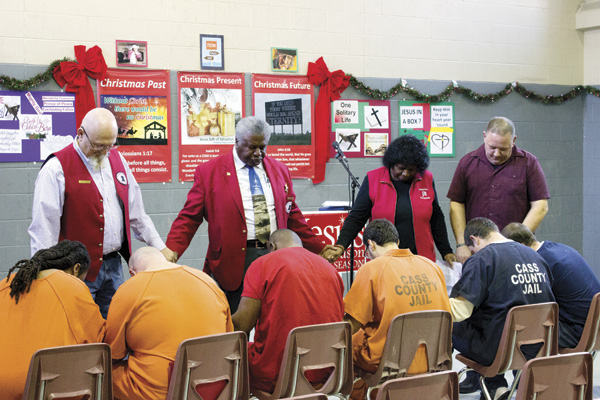 Elkhart’s Angelo Sebeck does not claim to be perfect.
Growing up in New Jersey, Sebeck got into his fair share of trouble. After his mother fell and injured her knees, the 13-year-old teenager began working in order to support his family — as a consequence, he soon started roaming the streets, partying and running afoul of the authorities.
However, after moving to the Michiana area in 2003, the man discovered a higher power that saved his life: God.
Today, Sebeck is a man on a mission, committed to spreading the good word to those who were once like him — lost, confused and in need of guidance.
“The lord gave me a second chance,” Sebeck said. “To keep his message holed up inside of me and not share it with others is selfish.”

Sebeck has spent the last several years volunteering with the Cass County Forgotten Man Ministries, a jailhouse program that enlists the aid of dedicated ministers, who conduct prayer services and Bible study for men and women imprisoned in Cassopolis. Sebeck lends his gregarious spirit to the program’s Bible studies every Monday, where he works with a group of male inmates.
On a snowy Saturday in December, Sebeck made the drive from Indiana to Lindy’s Restaurant in Cassopolis, where he met several other ministers with the program for lunch, as well as leaders with the jail and Cass County Sheriff’s Office. After happily chatting with old friends, he and the rest of the party made the short journey to the jail, where the Forgotten Man Ministries members hosted the annual Christmas in Jail ceremony.
Setting up inside the dimly lit gymnasium, the volunteers set up posters and a projector, which they used to put up lyrics to the various Christmas carols they planned to lead their guests in during the program. As the inmates shuffled in, Sebeck and the others happily greeted them, chatting with them about how they have been holding up and leading them in a prayer.
For Sebeck, ceremonies like the Christmas program are what Forgotten Man Ministries is all about — giving the inmates a sense of normalcy in a troubled time in their lives, and providing them with an example of another way they can live their lives.
Sebeck first got involved with the ministry after connecting with one of the other ministers at Niles’ Bertrand Bible Church, where he attends services. After joining his friend during one of the visits at the jail, he knew he had found what the lord was calling him to do.
“It’s part of my life,” he said. “It’s who I am. I want to help people.”
Over the years, Sebeck has witnessed first-hand the power prayer has on the lives of the inmates he works with, some of whom have never truly had someone show them right from wrong, or grew up without the guidance of their parents. For him, the most impactful moments are seeing men with gruff exteriors — or “big, tattooed guys,” as Sebeck described them — drop their defenses and break down crying, accepting God and wanting to change their lives.
“It is more than just Bible study,” Sebeck said. “It’s about growing and becoming a better person. Some guys really need that. We all need a friend, someone to talk to.”
Joining Sebeck during the Christmas service were Dowagiac’s George and Linda Myrkle. The couple has volunteered for the last seven years, helping out the jail chaplains with the Forgotten Man Ministries’ Sunday services.
Like with Sebeck, George and Linda’s volunteerism is personal.
When their son was a teenager, he spent several stints in jail. As he has since turned his life around, Linda said she feels a drive to make sure that others get the same help.
“As a mom, I understand what this kind ministry means to other moms,” she said.
Like with Sebeck, Linda said the best part of her job is working with the inmates, helping them get closer to God and in, the process, learn that they can make better choices in the future to avoid a life of crime.
“We have seen lives turned around,” she said. “It is wonderful.”