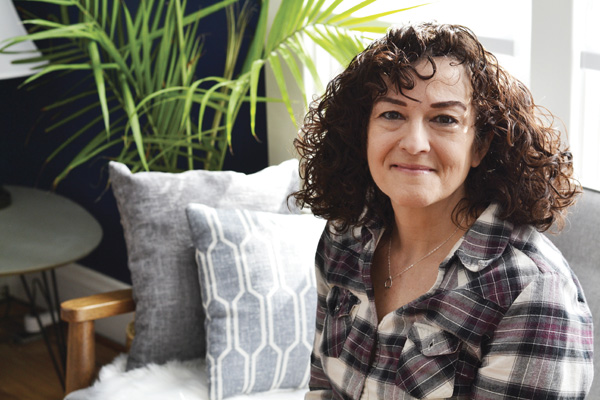 In 2008, Dowagiac resident Wendy Kast was pushing a cart through the aisles at a crowded Costco, squeaky wheels echoing on linoleum floors as she decided what to buy for dinner.
The hum of customers talking amongst each other, pushing their own carts, shuffling items on shelves surrounded her.
This soundtrack of squeals and chitchat was hardly noticeable — until suddenly there were no sounds at all.
“I still remember, my husband was talking to me,” Wendy recalled, relaxing nearly a decade later as she waits for the beep of the coffee maker to let her know that her beverage is ready. “I looked at him and said, ‘I can’t hear a word you’re saying. I’m just reading your lips. I can’t hear anything.’”
Kast, 53, grew up with a hearing loss that was discovered when she was 4 years old. The cause of the hearing loss was unknown, so she was fitted for a hearing aid in her worst ear, and continued to live her life like any normal child would. Her hearing remained stable until 1993, when she lost complete hearing in her right ear. Then, on that day in Costco in 2008, she lost her hearing entirely.
“It was really disconcerting,” Kast said. “It really happened in a matter of days. My hearing was just gone. It freaked me out. … It was incredibly terrifying.”
On July 22, 2008, Kast underwent bilateral cochlear implant surgery, a procedure that would change her life. The implant, which attaches to the back of the head via magnets, bypasses the damaged portions of the ear and transmits sounds to the brain to be interpreted, which allows the recipient to regain hearing.
The surgery inspired Kast — who refers to herself as a bionic woman — to start her blog, “Sudden Silence,” to share her experience with the world and help others who are going through what she went through.
“There is so little support [for people experiencing hearing loss],” Kast said, as her husband placed a cup of coffee in front of her, barely making a thud on the wooden table. “There was no one who told me where to get an alarm clock that would wake me up, now that I couldn’t hear. There was no one who told me that I needed a doorbell that flashed the lights. There’s no one to tell you how to make your life easier. I had to go online to find out those things on my own. … I do what I can to help others navigate the process.”
“Sudden Silence” was launched in April 2008, as an outlet for Kast to share her experiences as she lost her hearing, and later morphed as a way for her to share knowledge and tips with others going through hearing loss.
“I just had to do something. I had to get all these thoughts out of my head about what it felt like to lose my hearing, what it felt like to experience these things, like the first time that I made microwave popcorn and realizing I had no way to know when it was done,” she said, tapping her fingers against her mug. “As I got over the emotion of it all, I started getting frustrated with the lack of help I was getting, and I thought, ‘let me get something out there.’ So, I made posts about how I got over obstacles I experienced on a daily basis and shared any resources I had, like how to use the captioned phone I have.”
Once she knew she would be getting cochlear implants, she found other communities online for support, and eventually made several posts on her blog containing information about cochlear implants.
Kast believes in the importance of creating online communities, such as her blog, for people with hearing loss, as it can spread information and help people find what might be the right treatment for them.

“It’s not like you walk down the street and find someone with a cochlear implant,” Kast said. “When I [first lost my hearing], I thought that I was the first person this had ever happened to. It was just terrible, but then you realize that there are others. They are far-flung and not from my town, but I’m not the only one this has happened to. It makes you feel a little less alone.”
Kast also shares her stories over Instagram, where she currently has nearly 2,000 followers. There, she shares not only her hearing loss journey, but also her love of cooking and testing recipes.
Kast’s family has been supportive of her blog and social media usage, and said that they are glad that she is able to talk to others who are going through what she went through.
“It makes her happy,” said Kast’s husband Dave, who is also hearing impaired. “I’m not bothered by it.”
Because she has been documenting her experiences for so long, Kast has a reference to look at when recalling her memories, but there are some experiences that she and her family will never forget, even if they were not written down.
“I remember this one time, [Wendy] kept asking me what a buzzing noise that she was hearing was. She said that it was annoying her,” Dave said, recalling the memory while clinking a stirring spoon against his cup of coffee. “It was a lawn mower. She was hearing a lawn mower for the first time, because she could hear better with the [cochlear implants] than she ever could with just hearing aids.”
One of the stranger things Kast remembers during the first few months of having the implants is having to relearn how to listen to music.
“When I got the [Cochlear implants], it wasn’t like I just heard what I remembered. Everything was a bunch of weird buzzes and clanks that I didn’t recognize. The first time I heard music, it was just like crashing noise. It was awful,” she said. “I just had to keep listening to songs I knew before, and listen to it over and over and over. And each time, it made a little more sense, and eventually, I was able to make out different instruments, which I could never do before.”
In the summer of 2017, Kast went to her first concert — Depeche Mode, one of her favorite bands —  since getting her cochlear implants, an experience that she said was better thanshe ever imagined.
“Being able to hear them properly, without having to take my hearing aids out and have everything be muted, was incredible,” Kast said.
Because she has had such a positive experience with cochlear implants, and recently received a new pair to improve her hearing even further, Kast plans to continue her blog and sharing her experiences online.
“If the information helps one person, that’s great,” she said. “If someone is going through what I went through, I want to make it easier for them than it was for me.”