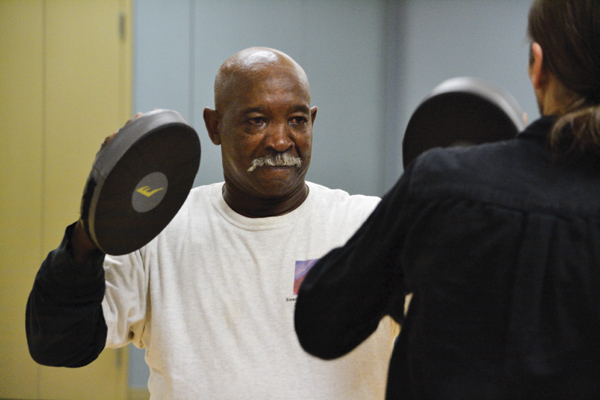 While his days of jabbing, hooking and upper cutting his way to victory in the squared circle are long behind him, Dowagiac’s Walter Swann is still a prizefighter.
These days, though, Swann measures his success not with championship belts or purse money, but the satisfaction of knowing that he is helping others in the community to stay in shape and live a healthier lifestyle.
The former professional boxer and U.S. Navy veteran has spent the last 20 years sharing his knowledge of fisticuffs with the people of Dowagiac, through various programs in the community.
This fall, Swann began giving boxing instruction lessons at the Cass County Council on Aging Front Street Crossing facility in downtown Dowagiac, where he teaches people of all ages and all walks of life how to float like a butterfly and sting like a bee.
Those worried about getting their bell rung or losing a tooth through the program should fear not. While the coach may be a former competitor in the Olympic Trials, Swann’s instruction is less focused on training locals for their big in-ring debut in the Golden Gloves and more about getting their hearts racing and sweat pumping, the Dowagiac man said.
“You don’t need to actually box anybody to get a good workout in boxing,” Swann said. “You don’t even need to box anyone at all. You can just work out, hit the speed bag, the heavy bag, the pads, or jump rope. You don’t ever have to touch anybody else.”

Opening bell
Swann has been a student of The Sweet Science of Bruising since his days in the military, though his love of athleticism and competition runs even further back to his childhood, he said.
Swann is a native of Salisbury, North Carolina. He grew up on his family’s farm as the youngest of 10 children. As a teenager, he began playing semiprofessional baseball with the Salisbury All Stars — in 1961, he had the chance to play in a game against legendary pitcher Satchel Paige: who struck him out immediately, Swann said.
“I watched three straight balls fly straight by me,” he said.
The following year, Swann graduated from Dunbar High School in East Spencer, North Carolina. While he held a number of different jobs in high school — including as a bus driver, ferrying his fellow students to class — Swann decided to enlist in the military after receiving his diploma, and followed in one of his older brother’s footsteps by joining the Navy.
While in boot camp at the Recruit Training Command in Great Lakes, Illinois, one of Swann’s superiors suggested that he compete in a “smoker” boxing match, an amateur competition against members of other Navy companies.
As it turned out, the self-proclaimed “country boy” was a natural, swiftly winning the bout, Swann said.
“They let me spar one time and they said ‘that’s it, you don’t need to spar anymore,’” Swann said. “Being raised on a farm, I was kind of a rough guy.”
After completing his training, Swann was assigned to USS Tom Green County, which was stationed at the U.S. Naval base in Yokosuka, Japan. Feeling seasick during his voyage, Swann began spending a lot of time working out in the gym, where he caught the attention of a coach who asked if he would be interested in joining the Navy’s boxing team.
Fighting as a 125-pound featherweight, Swann would periodically get flown from his ship to other Navy bases to compete in boxing matches, he said. His assignments took him throughout Japan, as well as Guam and Hawaii, he said.
In 1964, Swann had the opportunity to compete in the U.S. trials for Summer Olympics in Tokyo. The amateur boxer made it through the semifinals in San Francisco, where he was eliminated after losing his bout by judge’s decision, he said.
“It was a wonderful experience,” Swann about the trials. “I got to meet a lot of people through it.”
Swann left the Navy in 1966, with a record of 39 wins and three losses.

From fighter to coach
After his military service, Swann moved to Long Beach, California, where he went to work at the naval shipyard there (which closed in 1997).
His transition to civilian life did not temper his passion for pugilism, though. In 1967, he began boxing professionally at The Grand Olympic Auditorium in Los Angeles, where some of his bouts were broadcast on local TV, Swann said.
“A lot of guys, like [Oscar] De La Hoya, they were little back then,” Swann said. “They came up after me. We had some real tough cats out there. They were really good.”
Swann hung up his gloves the following year, after a loss at the Honolulu International Center in Hawaii.
Following his retirement, Swann spent several years away from boxing. However, he could not resist the siren’s call of the ring for long, as he began working as a trainer — something he continued to do for the next 45 years.
“You never get out of it,” Swann said. “It’s like any other sport: football, basketball. You are never out of it because it is part of your life. You want to pass it on to someone else, because you know it can keep them out of trouble or can lead to a lot of things.”
Dowagiac and boxing:  a one-two punch
In 1996, Swann retired from the shipyard and moved to Dowagiac with his wife, Alice, in order to help take care of her mother.
He wasted little time getting back into the swing of things when it came to passing on his knowledge of boxing.
He began working as an assistant trainer with the Dowagiac Police Athletic League’s youth boxing program, which he took over in 2005. Operating from a gym inside the former Lincoln School Building, Swann helped train local children in the art of boxing, with several of the program’s students winning Golden Gloves in regional tournaments.
However, the PAL program was later shut down, and, in spite of Swann continuing to train children out of the former school building on his own, he was forced to shut down several years later.
In 2013, Swann started a boxing program at Southwestern Michigan College as well.
Swann’s motivation for coaching is simple: he wants to get youth up and moving again, instead of falling prey to a sedentary lifestyle that is made all too easy in today’s society, he said.
“I want to get kids active,” Swann said. “My main thing is getting them in shape and exercising, not so much the boxing.”
Boxing also gives youth something to work for, as well as provides them with a useful and productive outlet for their energy, Swann said.
However, age is no excuse for older people to remain out of the ring, either.
Swann himself is an example of that fact.
Over the years, Swann has had to roll with some serious punches coming his way in regards to his health. He previously suffered from a heart attack — caused by problems from his exposure to Agent Orange while serving in Vietnam — which required him to receive five bypass surgeries, and is currently fighting diabetes, he said.
In spite of these challenges, the 76-year-old managed to shed more than 40 pounds between September 2016 and October 2017, through good old diet, exercise — and, of course, putting on the gloves and throwing a few jabs.
“[Boxing] keeps you young,” he said. “I’m living proof of that. I’m 76 and I feel good. I feel real good.”