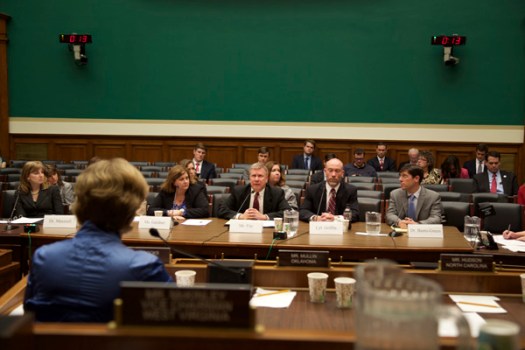 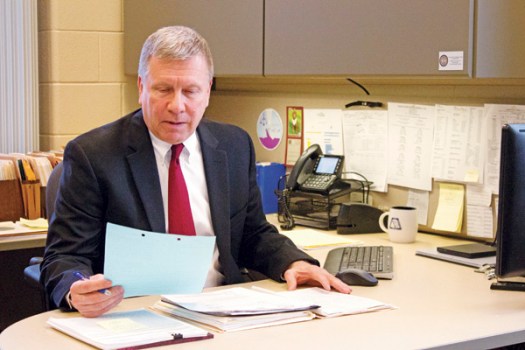 The largest of missions often begin with the smallest of lessons, as is the case for Cass County Prosecutor Victor Fitz.
Growing up one of five siblings in Grand Rapids, Fitz learned from an early age the difference between right and wrong, and the importance of always trying to do the best by others. His father, Edwin Fitz, was a beloved Lutheran minister who led his children, congregation and community by example, and always strived to put the needs of his family and neighborhood before his own.
“I can recall walking down the street once, and throwing my gum wrapper on the ground,” Fitz said. “My dad looked at me and said to me, ‘son, this is your neighborhood. Pick that up.’ So, I picked it up. I don’t think I’ve littered since.”
For nearly 40 years, Fitz has combined the unshakable moral compass he inherited from his father with his sharp, analytic mind and tireless work ethic to help protect men and women across the state of Michigan in the court of law.
Fitz, of Cassopolis, has served as the head of the Cass County Prosecutor’s Office since 2003, coming to the southwest corner of the state from Muskegon County. In addition to his work in the courtroom, Fitz has dedicated his time to serving on various boards and organizations dedicated to improving criminal justice in Michigan.
However, a career in law was not the future that Fitz envisioned during his formative years.
Like most children of his generation, he and his siblings — as a household of five children, Fitz said his family was one of the smaller ones in his neighborhood — were used to spending most of their days outside the home, from the time they left for school in the morning until dusk, Fitz said. He and the rest of the neighborhood’s children — often 30 or more at once — would gather to play football, basketball or baseball right there on the streets.
As a result, Fitz developed a deep passion for sports and athletics, and dreamed of becoming a professional athlete, he said.

“I was fine being a baseball, basketball or football player,” he said. “I didn’t have a preference.”
When Fitz was 13, he and his family moved to Traverse City. While still heavily involved in sports, the teenager began to focus more and more on his studies at school, thanks in large part to the watchful eye of his mother, Beverly, who made sure he and his siblings kept up on their schoolwork. High marks on his report cards translated to hefty scholarships and grants for his college education, which was a tremendous help for he and his family, coming from a household of five children and modest means, Fitz said.
He and his siblings also worked summer jobs throughout their teenage years, which helped keep them out of trouble, Fitz said.
“From age 13 on, I bought everything I ever owned, with the exception of food and shelter,” he said. “I bought my own clothing. If I wanted to go to the movies, I used my own money.”

Discovering a passion
After graduating high school, Fitz enrolled at Valparaiso University, where he studied English, journalism and political science before he finally settled on history as his major, he said.
After receiving his bachelor’s degree, Fitz returned to Traverse City, where he kept himself busy by working for a surveying company, driving a school bus, delivering packages on weekends with UPS, operating a tractor for a local farm and taking a paper delivery route, he said.
During this period, he kept in touch with several friends from college who began studying law. These friends convinced Fitz to return to Valparaiso for law school 18 months later.
While not enamored by his classes at first, he eventually became fascinated by criminal law, in particular prosecution, during his second year in law school. In 1982, he took an internship with the St. Clair County Prosecutor’s Office which cemented his newfound passion for the field.
In addition to doing pretrial case work and legal writing, his summer-long stint at the prosecutor’s office gave him the chance to try his first jury trial, a domestic violence incident where a man was accused of attacking his girlfriend, Fitz said.
“It really personalized it,” he said. “I saw a situation where one citizen had been assaulted by another, and it needed to be addressed. It was an opportunity to do that.”
Shortly after graduating law school in 1983, Fitz was hired as an assistant prosecutor with the Tuscola County Prosecutor’s Office. During his five-year stint with the office, he tried more than 50 jury trials, including one of his first cases after arriving, where he successfully convicted someone for stealing 10 cows from a local farm.
In 1988, Fitz took a job with the Muskegon County Prosecutor’s Office, where he dealt with a much heavier case load due to the increased amount of criminal activity occurring in the community. He quickly became active as the department’s main narcotics prosecutor, where he and his unit helped take down 13 drug kingpins operating in his jurisdiction — one of the highest totals of any county in the state, Fitz said.

His time dealing with drug cases forever shaped Fitz’s hardline stance on drugs, something he has carried with him through the rest of career, he said.
“Drug dealing affects a community far more than even murder does,” Fitz said. “It destroys the community. Kids can’t come out and play. The elderly shut themselves in behind locked doors. Businesses dry up. You create a legion of addicts that are like zombies walking through neighborhoods, whose lives have been destroyed. And why? Because someone wants to make some money. I don’t like the idea of someone making money at the expense of our children.”
Fitz later became a homicide prosecutor in Muskegon County, where he tried 19 murder trials. His experiences further hardened his stance on drug dealing,
While he did most of his fighting in the courtroom, Fitz was not afraid to do his part to stop crime on the streets as well during his 15-year career in Muskegon.
In 1993, while he and another assistant prosecutor were out preparing search warrants for upcoming drug raids, they were alerted that a teenager had snatched a woman’s purse and was running near the location. After chasing the 15-year-old in their car, Fitz — a former cross-country runner who was 35 at the time — dashed out of the vehicle and managed to outrun the teen, grabbing him outside a local elementary school.

Taking the helm in Cass County
In April 2003, then Cass County Circuit Court Judge Michael Dodge appointed Fitz to take over the Cass County Prosecutor’s Office following the departure of former Prosecutor Scott Teter, who resigned in order to pursue a job with the Michigan Attorney General’s office.
Fitz assumed control of an office with two other attorneys, both of whom were fresh out of law school. In addition, the new prosecutor quickly found himself roped into a problem that has consumed county law enforcement for more than a decade: methamphetamine abuse.
“Some words I’ll never forget were from [then Sheriff] Joe Underwood, who said to me, ‘you think crack cocaine is bad, wait until you see meth. It’s even worse,’” Fitz said. “Those were certainly accurate words. Methamphetamine is the most addictive drug I’ve ever seen.”
In 2004, Fitz and Underwood joined forces with then Dowagiac Police Chief Tom Atkinson to promote the creation of the Cass County Drug Enforcement Team through a millage, which was approved by voters later that year. On top of establishing a task force of county and city detectives dedicated to investigating and catching suspected drug dealers and manufacturers, the millage funded a dedicated drug prosecutor on top of the other staff members at the office, Fitz said.
Though his zero-tolerance approach to drug dealing has softened somewhat with the introduction of various court-mandated treatment programs in the county over the past 10 years, Fitz still maintains a simple philosophy when it comes to dealing with people who violate drug laws: get clean or get prison.
“If you can get off the drugs, we will give you a shot at that,” Fitz said. “If you can’t, we will send you to prison. A drug dealer who is in prison is not beating up family members. They aren’t shooting other drug dealers. They aren’t robbing homes. The community is safer when they are off the streets. If they can get off the drugs and become law abiding citizens, so much the better. If they don’t want to get with the program, we will find a place for them to stay.”
Over the last 15 years, Fitz and his team of assistant prosecutors have secured convictions on a number of high profile cases in Cass County, including a handful of murders, such as the killing of Darius Nickens, which occurred in Dowagiac in 2011. In 2017, his office helped bring to a close the 1977 murder of Edwardsburg’s Robert Stasiak, which Fitz said is the oldest cold case killing to be solved in the state of Michigan.
Fitz has also been a leader at the state level as well, as a member and past president of the Prosecuting Attorneys Association of Michigan, and as chair of the Michigan Crime Victim Services Commission. The prosecutor was instrumental in preserving the state’s truth in sentencing policies when the state was considering relaxing them several years ago.
The Cassopolis man also helped bring the state’s restrictions on use of a watercraft while intoxicated in line with standards police use for drunk driving on state roads, prompted by the death of a 7-year-old on Donnell Lake in 2005, who was killed when an intoxicated man operating a jet ski collided with a water tube the child was inside. Fitz still keeps a keychain with the victim’s photo on a bookcase in his office: a reminder of why he does what he does.
“There is a thin line between civilization and anarchy — and we are part of that thin blue line,” Fitz said. “We have to be ever vigilant. I truly do believe in the phrase ‘all that is required for evil to prevail is for good men and women to do nothing.’ We are trying to do something. Those are our marching orders.”