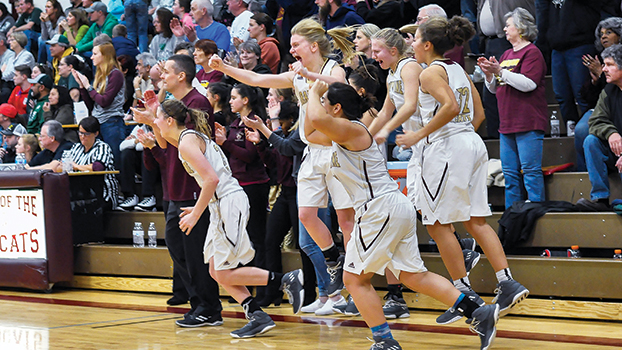 NILES — In front of a home crowd, Brandywine nabbed its eighth district title in the last nine years, breezing by an exhausted Hartford team, 64-44, Friday night in the Class C championship game.

Led by Zakiyyah Abdullah with 26 points and Nicole Sachman, who had 17 points, 12 rebounds and nine assists, The Bobcats took control of the game from tip-off and never let the Indians het within reach.

With the win, Brandywine will face Bronson Tuesday night in Bridgman for the regional semifinals.

Sachman, a junior, was excited to put her hands on a second district trophy, but said the celebration would be short-lived.

“I’ll enjoy this moment right now because we have a lot of conditioning and studying of Bronson to do all weekend. When we wake up tomorrow we have to focus on our next game,” she said.

Sophomore Kennedy Byrd, who had back-to-back buckets to open the second half, said all of the team’s hard work is paying off. Head coach Josh Hood gave her recognition for her defense against Hartford’s Armetrius Jackson, a 6-2 center who scored 21 points, saying she did a phenomenal job of getting her off the line.

“I played as hard as I could. She was tough,” Byrd said.

She also credited her team’s constant work ethic on the court as being a big key in their success.

“All the running, studying offenses and defenses of other teams,” she said. “This is why we do it. We put a lot more preparation into practices than most and this is our reward. It feels great to win championships.”

Hood has said time and time again that his program is expected to work hard. His team performs six — sometimes seven — days a week. And with just eight players most of the year, his squad has to work even harder to compete with teams who have almost double that number of players.

“We don’t have a lot of bodies because it’s not easy playing basketball here,” Hood said. “It’s dedication. Most of these girls are multi-sport athletes, but first and foremost they are student athletes (with another likely academic all-state honor). We work extremely hard on and off the court and I am very proud of this program. We’ve established a culture.”

He spoke of seniors Alexia and Melanie Martinez, whose junior team was 0-24. Despite that losing record, they never given up, continued to work hard and now have the titles to prove it.