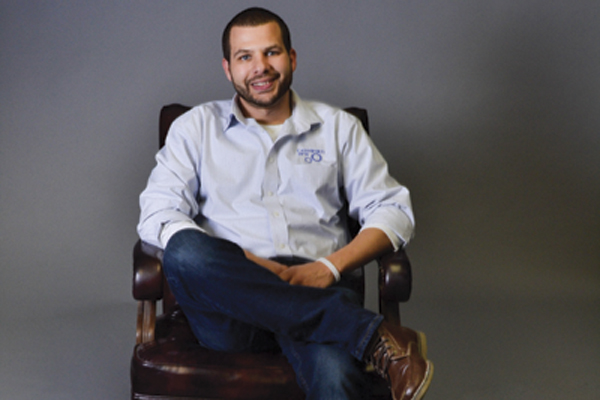 Cassopolis’ Ben Anderson did not grow up dreaming about being the supervisor of the village’s department of public works, but his experiences growing up led him to that position in his hometown.
Anderson, 35, is a 2001 graduate of Cassopolis High School and attended Southwestern Michigan College from 2001 to 2003.
Growing up, he worked in the restaurant business, and also as a front desk receptionist, an assembly line worker and a welder before joining the Cassopolis DPW in May of 2006 as a crew member.
“I worked at probably every small restaurant in this area at a young age,” he said. “Once I was old enough to drive and get a job elsewhere, I left college early and started working at factories, and realized pretty quickly that job was not for me.”
Anderson said he realized just how hard factory work was, and although he is not afraid of working hard, it was something he did not want to do for the rest of his life.
While he was working as a welder in Middlebury, Indiana, and driving one hour each direction, his mother-in-law told him about a position that was open with the department of public works.
“She said they were hiring, but I really did not know what that meant,” Anderson said. “So, I did [apply], and Ron Bass at the time said I had to have a commercial driver’s license. I went and got a CDL, and came back. He said I could start on Monday.”

Anderson said it took him more than a year to understand the difference between working for somebody in the private sector versus working for someone in the public sector.
“I thought he was going to fire me,” Anderson said. “But once I figured it out I realized all I had to do was come in here and work hard, and not be an idiot.”
Bass encouraged Anderson to take the state’s water exams to earn certification.
“I took some exams and did really well on them. I showed it to Ron and he said I had a lot of potential,” Anderson said. “He was going to move me into doing some superintendent work so that if he was ever to leave I could take his place.”
Before any of that training took place, Bass died.
“So, I did not have any real professional training for this job, but I came in and the people around me really helped me out,” Anderson said. “We had people here like [former Police Chief Frank] Williams and [former treasurer] Cheri Martine. Our [former village] manager Cindy LaGrow probably had the biggest impact on me.
Anderson said he would often talk with LaGrow about water issues, a subject she had little knowledge of. She advised him to join a group of fellow professionals.
“She sent me to the American Water Works Association conference one year and I fell in love with the people and the entire conference. She was right,” he said. “That helped bring my level of professionalism up to where it is today. I still go to those conferences.”
People like Williams recognize the need to keep young professionals like Anderson in the village, because they have a vested interest in their communities.
“It is a plus for the village to have someone like Ben,” said Williams, who is now a member of the village council. “You have got to have somebody that has knowledge and can do the job that Ben does. With today’s systems and technology, if your lift stations are not working and you do not have proper water flow, where would you be? This community should be really thankful we have got somebody to be able to step in and do what Ben does because it is a thankless job, and I would not want it.”
By going to places like San Diego, Texas and Florida, Anderson was able to learn what it took to be a superintendent. He was able to meet other people from small communities, and talk to them about how they run their systems.
Now Anderson is in the same position he was when Bass took him under his wing and set him on a career path more than a decade ago.
“I would certainly advise [people] to not take the path I took,” he said. “When I talk to kids from our area and some of the summer workers we have, I don’t immediately start talking about the water industry and how they can find a career path there. I say, ‘look, go get that associate’s degree and this right here and try to be an engineer or just a general focus on whatever it is that you are doing.
“Do not wait for it to happen to you. I was really unprepared to be a supervisor of other people when I got here. I definitely encourage college and even trade schools in some cases.”
Anderson also uses his prior experiences when dealing not only with his workers, but the public in general.
“I find that I have a lot of respect for every person who is working,” he said. “Whether I am going to McDonald’s or Subway for lunch, when I walk up to that person I first ask them how they are doing, because I am just not talking to a machine, but a person. You have to have respect for that person because they are working and they are trying their best.
“I do not think workers get enough respect in general. I have scrubbed toilets. I have washed floors and dishes. I am very grateful for the job that I have now, but I am not above doing those things now. I work in the sewer system,” he said. “It humbles a person once you realize you are not just working on one person’s toilet, but everyone’s toilet.”

Stacey Carlin is always hustin’. Outside of co-hosting a podcast, “Hustlin’ in Heels,” she serves as the brand manager for... read more