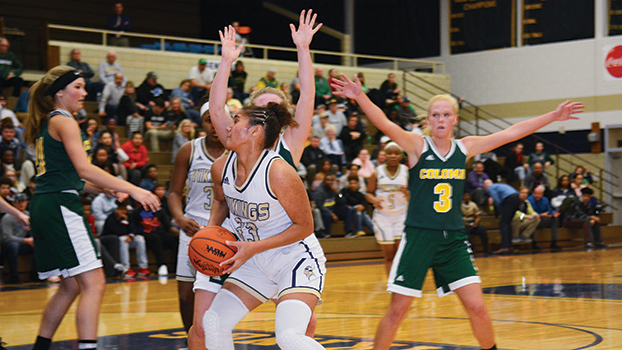 NILES — The Niles girls basketball team will be chasing history when it hosts Berrien Springs for the Class B district championship at 7 p.m. Friday.

Niles advanced to the title game with a come-from-behind 43-31 win over Coloma Wednesday night in the second semifinal.

Berrien Springs (9-13) moved into the championship game with a win over South Haven.

The Vikings and Shamrocks are no strangers, as they met in a non-conference game Jan. 20. Niles defeated Berrien Springs 51-40 to snap a three-game losing streak.

The Vikings struggled from the field and at the defensive end by giving up too many offensive rebounds to the Comets, who also had trouble putting the ball in the basket for the first 16 minutes of the game.

It was a much different story in the second half for Niles, especially when sophomore point guard Alycia Patterson provided a dramatic finish to the third quarter.

With time winding down, Patterson pushed the ball up the court and launched a long 3-pointer which found nothing but the bottom of the net to give the Vikings a 25-24 lead.

Patterson is no stranger to giving her team a spark. In Monday’s opening round game against rival Buchanan, she hit the game-winning jumper at the buzzer.

“When Alycia makes great plays like that it gets the whole team hyped,” Niles coach Jessica Johnson said. “It also gets the crowd involved and we were able to feed off that energy.”

It was all Niles in the final eight minutes as the Vikings outscored Coloma 18-7.

Patterson scored 14 of her game-high 25 points in the second half, while senior Lajan Mitchell came off the bench and scored nine points and grabbed a team-high 11 rebounds.

Johnson said she felt very fortunate to only be down three points at halftime and that the plan was to turn up the defensive pressure and hit the glass.

“We picked up our defense and that helped,” she said. “Our full-court pressure held us get our offense going. The problem was they were just killing us on the boards. They were getting to the rim and getting to the boards, which got us in foul trouble.”

The message from Johnson heading into the fourth quarter was simple.

“We got the buzzer-beater out of the way, so now we need to make sure it is not a close game,” she said. “That is exactly was the message was.”

Bobcats on to title game