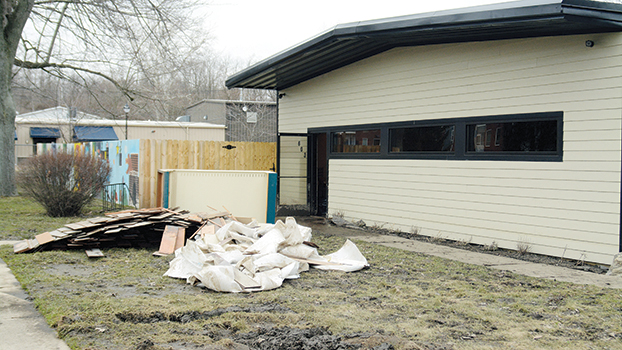 NILES — This week a number of downtown businesses damaged by the floodwaters were able to open their doors to start the cleanup process — a chore that for many has involved using a lot of elbow grease.

For Dollar General employee Will Johnson, the task has been wet, muddy and stinky. By Wednesday, Johnson had his boots to the ground and worked alongside four fellow employees to toss out sodden food and merchandise.

“It’s been a little tough,” Johnson said. “The first day was just trying to figure out what we were supposed to do.”

Johnson said employees missed a week’s worth of work during the storm, but this week they are back on the clock cleaning.

Joy Pena, the Dollar General manager, was among those hard at work Wednesday. She wore rain boots and gloves for the job. Wednesday marked the store’s second day of cleanup, she said.

“I wish you could see inside, it is terrible,” Pena said of the store’s condition. “We have to get everything that is damaged out first and then [a company] will clean the floors.”

Pena said the store’s registers and coolers will likely have to be replaced. She said she did not have a complete estimate on the cost of damages, but that it would likely amount to thousands of dollars.

Pena said she estimates that it will be at least a month before the store re-opens. Already, she said customers had been asking if they could come inside and shop.

Dollar General employee Sherri Rhodes said many people who live in the downtown depend on the store for grocery shopping.

“We know we need to get it back up and running for the community,” Rhodes said. “There are handicapped and elderly [that depend on it].”

Employees also expressed frustration at not being able to reach corporate to get help and more direction with the cleanup process. They said they hope to be able to get some backup cleaning and speed the recovery process along.

Down the block, Brandon Bielski hauled water-logged shelves to a pile outside of Custom Computer Company, 603 N. Second St.

“I’m just trying to get this place back up and running,” Bielski said. “[I want to] get everything dry and get what is trash out.”

While damages to the building are expected to be covered by insurance, owner of the computer shop Michael Reed has said earlier that the approximately $250,000 in technology losses will not be covered. A Go Fund me was started last week to help Reed replace the equipment.

Bielski said he has been volunteering along with friends and family to help restore the devastated computer repair shop and community computer lab.

Bielski said as they make repairs, they will attempt to add some flood proof features to the building’s new design. These features will include putting electrical outlets higher up.

Bielski said he hopes that FEMA will be able to help cover the cost of some of their inventory. He said the shop will be submitting pictures to the organization.

Other downtown businesses have also predicted that it will take about a month to restore their storefronts.

Wonderland Cinema announced on its Facebook page that it should be open in a month. So far, the business has been able to remove flooring, carpeting and dry wall. They encouraged customers to check out their other theaters, including the Loma in Coloma and The Michigan in South Haven.

Front Street Pizza Pub owners also posted on social media that they had begun the restoration process and hoped to be done as soon as possible.

NILES —  For more than two years, Joseph Stephens, of Niles, has been working tirelessly to advocate for a bill... read more