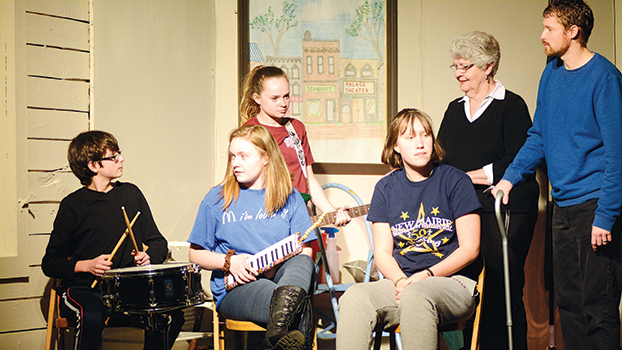 In this scene of “Here Comes the Judge” rebellious teens get busted for playing their music too loud by group of elders. (Leader photo/KELSEY HAMMON)

BUCHANAN — On Tuesday evening, actor Phil Brackett, of Buchanan, donned the black robes of a judge and took to the stage at the Tin Shop Theatre. While the outfit might suggest a stern character, in “Here Comes the Judge” Brackett gets to be anything but in his role of Judge Knott.

Alice Kring, the play director, has spent the past couple of weeks guiding her 21 actors through rehearsal. Kring said she chose “Here Comes the Judge” by Billy St. John, because it was lighthearted and sure to cause her audience to laugh.

The production is the 10th that Kring has directed in her eight years serving the Tin Shop.

Kring said she chose this particular play because she liked that it had roles for adults and teens alike, bringing actors of all different experience levels together. She also liked that the play was comical.

“I just hope [the audience] has fun and laughs a lot,” Kring said. “It’s important to support local theater [and this is a chance] to have a nice, fun evening out and forget about life and just come and laugh.”

In the play, four “punk” teenagers meet to practice loud and unskilled rock and roll music into the late-night hours. A group of elders, greatly disturbed by the sound, try to ask the youth to turn their music down. When the youth refuse, they find themselves in the courtroom before Judge Knott, facing a charge of disturbing the peace.

But before Judge Knott can sentence the suspects standing before him, a courtroom holdup forces those in the room to work together to escape their zany captors.

Twelve-year-old Landon Mitchell, of Buchanan, stars as one of the punks named Iggy Turner. Mitchell has starred in numerous Tin Shop plays since he was 9 years old. Mitchell said he like the play’s humor and hopes that the audience appreciates it.

Mitchell’s father, Marcus Mitchell, is also an actor in the play. He takes on the role of Albert Mickle, one of the elders who is upset with the sound of the music.

“He’s crotchety and hard of hearing,” Marcus said of his character. “I just like being an old man.”

The play also has a special guest and local TV reporter who interviews those involved in the courtroom holdup. The pre-recorded segment will be played during the performance.

Kring said she likes directing plays at the Tin Shop, where local youth have the chance to take part in a variety of productions and hone their acting skills and love for the arts.

“Buchanan High School does not have a drama program and these kids don’t have an outlet, other than community theater,” Kring said.

Kring encouraged those looking for a laugh to see the play.

“It is zanier than Judge Judy,” Kring said.

WATERVLIET — The Berrien County Sheriff’s Department is searching for a 35-year-old Niles man who went missing while kayaking on... read more