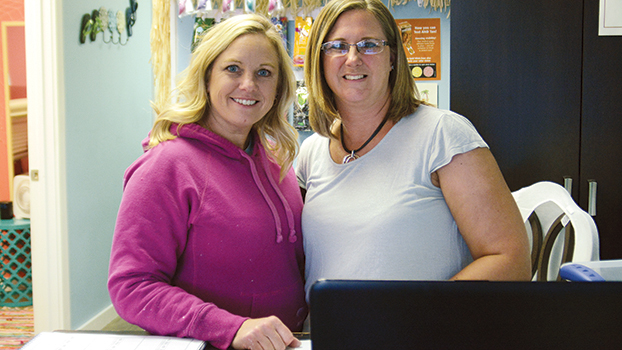 From left, Julie Capron is pictured with Amber Osha, inside Julie’s Wear & Share. Capron is closing shop, but decided to give the merchandise to flood victims in need. (Leader photo/KELSEY HAMMON)

As she pulled the car into the campground, Capron said she witnessed the heartbreak around her as residents of the camp and nearby trailer park, River Springs Estates, worked frantically to grab their belongings and evacuate. With little time to spare, many residents lost everything, Capron said. Capron, a former resident of Berrien Springs, said seeing families struggle hit home.

“I was looking around, like this horrible,” Capron said. “It broke my heart.”

So, when Anna Gordan, a Buchanan flower shop owner, announced that she was collecting donations for Berrien Springs flood victims, Capron said she took it as a sign.

For the past year and half, Capron has operated Julie’s Wear & Share, 256 E. Front St. — a resale shop and tanning salon with a goal to offer affordable name-brand clothing. Capron decided recently that she will be closing the store on March 31. With clothing still filling her shelves and racks, Capron decided that she wanted to donate the merchandise to flood victims.

“I could sit here and lower everything and keep it and make whatever penny,” Capron said. “But I’m not in the position that the flood victims are, so I said ‘let’s bag [this merchandise] up.’”

Capron loaded up a truck with about a 20 trash bags containing women’s and children’s clothing and shoes and dropped them off at Flowers by Anna. The items were picked up and donated to Neighbor to Neighbor, a Berrien Springs organization that works with Family Emergency Services to supply basic needs to families in need.

Capron’s clothing contributions will be free and available to flood victims.

Capron said she had dreamed of opening her own clothing store for a long time. She said a friend convinced her to follow through, so a year and a half ago she opened Julie’s Wear & Share, which first operated as a consignment store and most recently as a resale store. True to her efforts to give back, Capron said she saw Julie’s Wear & Share as a means to help her community. When she first opened the store, Capron offered discounts to customers who donated an item to the Redbud Area Ministries — a local food pantry, clothing and necessity ministry. She also said she donated a number of items to local schools.

“It just feels good to give back,” Capron said. “Buchanan is so known for giving back to the community.”

But recently, Capron said she felt like she had fulfilled her dream and was ready to pursue a new one. Capron said the store was profitable and finance did not play a role in her decision. She owns the building where Julie’s Wear & Share is housed and said she expects another business to fill the hole, but she cannot yet disclose what that business is.

Customers are welcome to come in and use tanning services through March 31. Jewelry is also still available for sale. Capron also welcomed consignment sellers to collect their payment.

In addition to running Julie’s Wear & Share, Capron is also an associate broker for Cressy & Everett and the owner of Michiana Maids.

Reflecting on her time at the store, Capron said she would miss her customers.

“It was great getting to meet so many new people who I had not known,” Capron said. “I just want to tell everybody that if you have a dream, there’s nothing that can stop you. Go for it.”