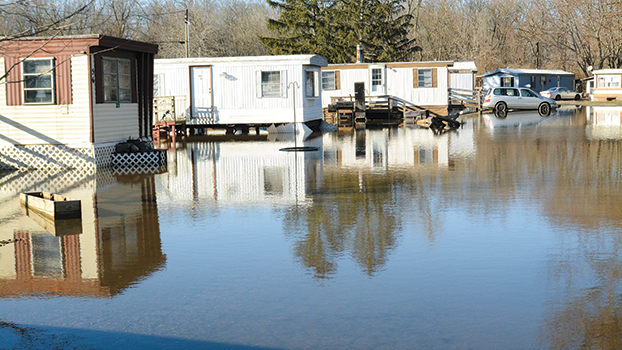 A preliminary assessment approximated that about 75 percent of the units in River Springs Estates sustained damage. Residents of the park were evacuated last week as weather conditions worsened and floodwaters continued to rise. Berrien County Sheriff’s Department Chief Deputy Robert Boyce said residents had been permitted to return to their property to see if they could salvage some of their belongings, but that it was not advised that residents move back in.

The American Red Cross is providing shelter at Berrien Springs Middle School for residents displaced by the flooding.  According to Berrien Township Supervisor Bryan Bixby, there are about 70 people still housed in the shelter as of Monday afternoon. Bixby said a number of those residents were from the River Springs Estates.

Bixby said the park residents he talked to were trying to cope with the loss of their homes.

“Most are pretty devastated,” Bixby said. “They don’t know yet what their next step is going to be.”

Boyce said he spoke with the park manager of the property Monday afternoon and was told that they were hoping to start relocating some of the individuals who had properties on higher ground soon.

Bixby said that approximately 100 volunteers are anticipated to help clean up River Springs Estates on Wednesday and Thursday. During that time, KC Rolloff will be providing dumpsters free of charge.

During the damage assessments, Boyce said officials would be recording the extent of flood wreckage, as well as planning for repairs and approximating the time required to execute their plans. He approximated that damages to the River Springs Estate Park could take up to a week to complete.

“This was one of the more heavily damaged areas,” Boyce said. “[Assessors] are going by and they are checking the exterior of the residence. In some cases they may check the interior. This gives them a good estimate of the dollar amount of the items damaged or lost.”

Such an assessment will also seek to provide a long-term strategy for areas impacted by the floodwaters and what assistance residents might need to thrive, he said.

Last week, Berrien County declared a state of emergency. Boyce said there is a potential that federal funds could help to cover some of the damages, but that it was too early to tell, because officials are still gathering information. He asked residents with damage to assure that they were carefully documenting damages to their property.

“Take photographs and video, anything they can,” Boyce said. “It does need to be reported and the more accurate the information compiled, the better the chance of having relief help in the future.”

Boyce said his advice to residents was to take advantage of all the available assistance offered to the community.

“Unfortunately, this was a tragedy, but property can be replaced and we are thankful no one was hurt,” Boyce said. “It’s going to be time consuming [to make repairs] but rely on your faith, your family and your friends and the generosity of the community rallying around you.”

NILES — Eastside Connections student Julia Babcock is well-known by her family and friends for her generosity. The 11-year-old has... read more