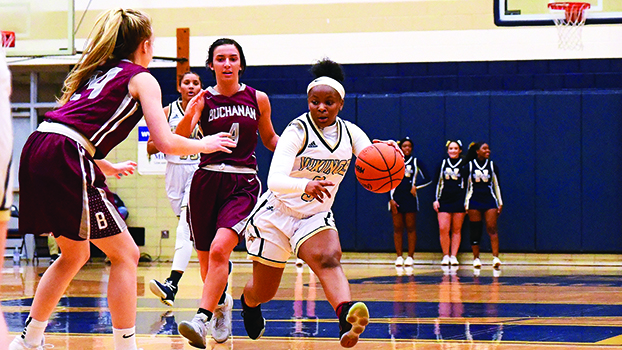 Niles sophomore Alycia Patterson (5) scored the game-winning basket at the buzzer as the Vikings edged Buchanan 44-42 in the Class B district opener Monday. (Leader photo/KELLY SWEENEY)

NILES — Two weeks ago Buchanan made the 7.4-mile trip to Niles in a preview of Monday night’s Class B District opening round.

This time though, the Bucks looked for a little revenge, again, traveling to Niles High School.

However, it was a 12-foot Alycia Patterson jump shot that was the difference between excitement and heartbreak as the Vikings pulled out a 44-42 victory in the opening game of the Class B district tournament.

Grabbing the rebound with seven seconds left in the game, Patterson was in the spotlight.

“I told coach (Jessica Johnson) not to call a timeout,” said an elated Patterson after the game. “I came down the floor, called for a pick and came off of it. I hesitated, the shot went in the air and then it went in. It was amazing. I screamed and put my hands in the air. I just couldn’t believe it went in.”

“It’s a tough way to lose,” said Buchanan Coach Gabe Miller. “We had a rough stretch there at the end.  We had three turnovers and sometime the ball doesn’t bounce your way.”

Turnovers were the Achilles heel in the first three quarters as both teams combined for only 59 points.  The contest continued to swing back and forth with neither team unable to gain any significant advantage.

In fact, the largest lead of the game was Buchanan’s at five points.

With the score 30-29 in Buchanan’s favor heading into the fourth quarter, it appeared that the district opener was destined to be a nail biter.

A Buchanan 3-pointer by senior Morgan Lenox got the Bucks’ headed in the right direction. However, Patterson would get fouled on a layup and make the additional free throw to even the score.

The Bucks were able to increase the lead to 42-38 with less than one minute to go.

Niles senior Lajan Mitchell pulled the Vikings within two before sophomore Reese Davies stole the inbound pass and was fouled trying to make a layup.

Davies, who was 0-for-3 at free throw line for the game, drained both to tie the game at 42.

“I thought our sophomores were huge tonight,” Johnson said. “Reese’s steal was huge for us and even though Alycia had a frustrating game, she looked calm the last seven seconds.”

With the game not over, Niles collapsed on Buchanan senior Jayla Bibbs as she started to drive the lane for the potential game-winning basket. Bibbs, who was the sixth player in Bucks’ history to score 1,000 points last Friday, passed the ball to fellow senior Brooklyn Krumrie, who was waiting outside the 3-point line.

“We knew they were going to collapse on Bibbs,” Miller said. “Brooklyn is our best 3-point shooter. She missed and Patterson got it.”

Patterson scored seven of her team-leading 14 points in the fourth quarter. She would also add on five assists, four steals and two rebounds.

Bibbs finished her stellar career with 1,026 points, with 17 of those points coming against the Vikings. She also had a triple-double with an additional 15 rebounds and 11 steals to go along with five assists and block.

“She is a game changer,” Johnson said. “What a player.”

The Bucks also got seven from Megan Adkerson and six points from Krumrie.

Niles will now face Coloma (13-7) in the Class B district semifinals at 7 p.m. Wednesday at Niles High School.

CASSOPOLIS — There is an old saying about the postseason. All you want to do is survive and advance. And... read more