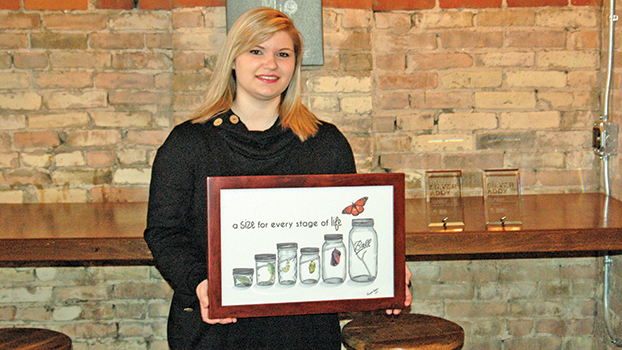 DOWAGIAC — Visiting home for the weekend, Morgan Adams, 22, originally of Dowagiac, sits in a center table of Baker’s Rhapsody downtown, a framed image on one side of her and two glass plaques on the other.

A mock-up advertisement for Ball Mason Jars, the framed image features an illustrated life cycle of a butterfly accompanied by different sizes of mason jars, with the phrase “A size for every stage of life” written across the top.

“I had to create a concept piece for a brand advertisement, and I was just really inspired by my own nostalgia [with mason jars],” Adams said. “When I was in elementary school, you would catch a caterpillar on your hand, and you would watch it grow up and eventually have to let it go. I was trying to illustrate that.”

Because of that image, Adams was awarded the plaques, regional silver medals from the American Advertising Awards, last Thursday at a banquet in Grand Rapids, Michigan. She was awarded in the categories of advertisement campaign and copywriting.

Dowagiac born and raised and a former Southwestern Michigan College student, Adams is currently attending the Kendall College of Art and Design of Ferris State University in Grand Rapids.

To design students like Adams, the American Advertising Awards are a big deal, which can bolster a resume and lead to more job opportunities, she said.

Though she will not be moving forward to the national American Advertising Awards because she did not receive a gold medal, Adams said she still was honored to have won her silver medals.

“It was my first time entering,” Adams said. “I’m happy to have gotten a silver. I was really excited to have that opportunity.”

Adams is not the only one happy with the award. Her mother, Beth Daly, was with her when she received the award Tuesday.

“I’m really proud of her and excited for her,” Daly said of Adams prior to the ceremony.

It is in part the support of her mother and family that has allowed Adams to be successful chasing her artistic dreams, she said.

She also said that the Dowagiac community, as well as her artistic education at Dowagiac Union Schools and SMC, helped to prepare her.

“Though we are a small town, we are doing a good job of getting students prepared for the big city, where the talent there is insane,” Adams said. “People work really hard here, which taught me work ethic. I feel like I had a well-rounded education.”

Adams said she plans to compete in the regional American Advertising Awards next year, and that she will be aiming for a gold medal to continue on to the national competition.

DOWAGIAC — Three students from Dowagiac Middle School have been named winners in the 49th annual America and Me Essay... read more