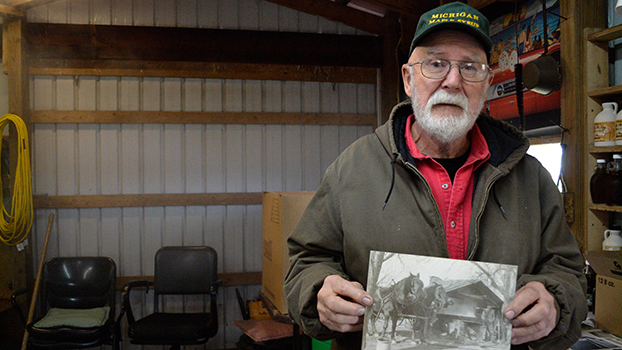 DOWAGIAC — As several gallons of boiling maple sap bubbled in an evaporator, Phil Meiser monitored one of his first batches of maple syrup Thursday morning at his Dowagiac farm on Dailey Road.

Dipping a finger in a cooled off sample dish, Meiser savored the syrup.

Outside of the sugar shack, steam spouted from the tiny red structure’s chimney, carrying with it the sweet smells of maple syrup in the making. It is here where Meiser toils most hours of the day seven days a week during the sap harvest period, which runs from February to March in southwest Michigan.

This year, he is hoping to create 100 gallons of syrup before the season’s end.

Meiser’s operation is called Meiser’s Maple Syrup, and he calls his product Pure Michigan Maple Syrup. Customers frequent the farm at all hours of the day, sometimes to buy the maple syrup by the gallon.

If Meiser is making the syrup when customers visit, he invites them to take a peek at the process.

Meiser, 79, is a third generation Dowagiac farmer who was born on the 200-acre farm. One hundred of those acres are made up of forest.

Meiser learned the tricks of the trade which were passed down from his grandfather Lester and father Wilbur. Several volumes of photo albums have helped to chronicle his family’s time on the farm. Among some of the black and white photographs, he proudly shows a picture of Lester outside the original sugar shack. Several other photos show him as a child on the farm. Meiser said he first started helping to make the maple syrup when he was just a child. As to how his family got into the business, Meiser said making maple syrup was just something a lot of local farms used to do.

Meiser and his wife, Betty, run the farm. In addition to making syrup, they grow soybeans and sweet corn. When he is not cultivating his crops, Meiser goes fishing or works in his two large gardens.

During the syrup season, he gets some occasional help from his brother-in-law, grandchildren and great-grandchildren. Mostly though, it is Meiser who bears the brunt of the labor. He checks the network of tree taps, which are rigged to hoses that funnel the sap into a central collection barrel.

Eventually the sap makes it to the sugar shack, where it will be boiled in the evaporator and thickened into syrup.

“You have to boil 49 gallons of water into the air to get one gallon of syrup,” Meiser said.

The ingredients of Pure Michigan syrup consist only of maple sap and a little bit of butter, which is added to keep the syrup from boiling over.

Meiser also chops wood to keep the fire burning hot under the evaporator. He has to feed the fire about every 15 minutes. About two gallons of syrup an hour is produced. A Niles company provides Meiser with the glass and plastic containers to sell the syrup in.

Meiser said people only have to give the Pure Michigan syrup a taste to tell the difference between it and the syrup they can find on most grocery store shelves.

“It’s a lot lighter,” Meiser said. “There are no preservatives, no nothing. My grandad and father have been doing this [for years]. I think we should know how it is done.

Running the farm and creating the maple syrup is no easy feat, but Meiser credits the hard work and physical activity for keeping him fit and feeling young at heart.

While Meiser said he has passed on some of his trade secrets to his own children and their children, he does not believe they will choose the same career path.

“When I’m done, the show is over,” Meiser said. “No one wants to work this hard.”

But with all Meiser’s hard work comes a fair amount of appreciation from those who have had the opportunity to taste the syrup.

“We get a lot of repeat customers,” Meiser said.

Edwardsburg resident receives 20 to 40 years for abuse of minor

CASSOPOLIS — A man whose victim said that he “took a huge chunk of [her] life” has been sentenced to... read more