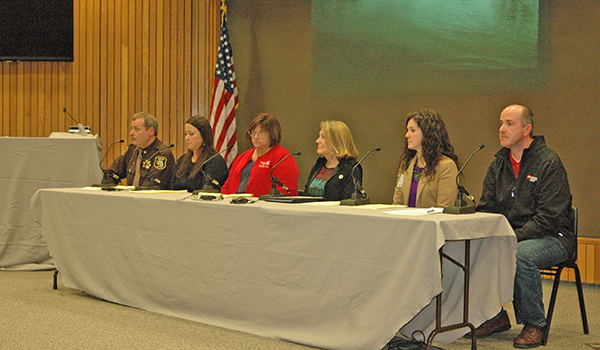 BUCHANAN — Sunday evening, as most people were putting dinner on the table, several Berrien County officials answered the public’s questions about where the county will go next.

Berrien County officials, with representatives from the sheriff’s office, department of health and human services, United Way of Southwest Michigan, the health department, the American Red Cross and Indiana-Michigan Power, hosted a press conference Sunday in Buchanan to answer the public’s questions and to address concerns about the aftermath of the county’s recent historic flooding.

“We just want to keep the community informed about some of the details of what we’ve experienced with our recent, local state of emergency,” said Chief Deputy Robert Boyce of the Berrien County Sheriff’s Office.

The main purpose of the press conference was to make Berrien County residents aware of the resources that are being made available to flooding victims, with a number of resources going into effect Monday morning.

Starting Monday morning, the Berrien County Sheriff’s Department Emergency Operations center opened a 1-800 number for individuals to report flood damage. The number to call is 1(800) 815-5485. Boyce also said that the sheriff’s office worked to streamline the reporting damage process on line by offering a link to all the forms necessary to declare damage at bcsheriff.org.

Also Monday, the sheriff’s office will begin sending out damage assessment teams to areas affected by the flood to get an estimate of the damages. Boyce said that the teams had to wait until Monday to begin assessing damages, as it would have been unsafe to send out first responders and assessors before the flood waters receded.

The damage assets teams will determine what residents need for both long and short-term care, according to Breeze Ettl of the American Red Cross.

“These funds will be used for basic and long term needs for families that have been affected by the flooding,” Murphy said.

In the aftermath of the flood, Berrien County officials asked residents to be aware of long-term effects that could affect them, such as mental health distress brought on by trauma.

For mental health counselors or for general help and assistance in the aftermath of the flood, officials encouraged residents to call 2-1-1, a number that will direct questions and inquires to the proper agency.

In regards to physical health, there are several concerns that have arisen in the aftermath of the flood, according to health department representative Nicki Britten.

First, Britten said that residents who use well water may have had their well contaminated by flood water. If one has reason to believe their well was contaminated, the water from the well is not safe for consumption and should be tested.

The health department started going door-to-door visiting residents it knows have wells on their property Monday.

Britten also said that residents should stay out of the flood water as much as possible, as it is bacterially contaminated. If one does come in contact with flood water, they should bathe immediately, she said.

Deputy Boyce also warned residents to be aware of scams that could arise in the aftermath of the flood. While no scams have been reported in Berrien County thus far, according to Boyce, a popular scam in the aftermath of natural disasters is false contractors that will offer to do work on homes, but will instead take the payment and leave the home undone. To avoid this, the sheriff’s department urged people to verify contractor licenses by calling (517) 373-8068, to verify references, get at least three estimates on work to be done and to not pay the full amount upfront.

“Sometimes, when there is a natural disaster, sometimes the criminal population tries to take advantage of the unfortunate,” Boyce said.

The press conference also addressed the county’s recent decision to declare a state of emergency that went into effect Friday.

DOWAGIAC — As several gallons of boiling maple sap bubbled in an evaporator, Phil Meiser monitored one of his first... read more