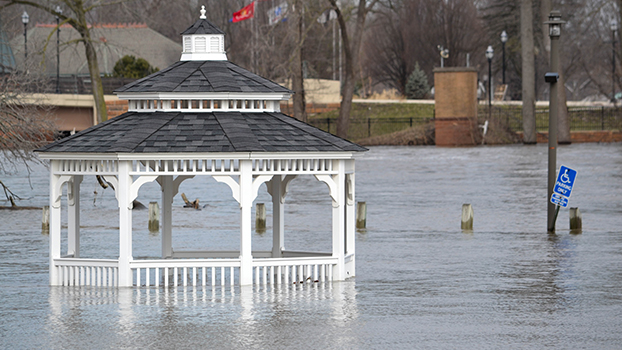 NILES — City of Niles officials and the Berrien County Board of Commissioners declared a state of emergency in their respective municipalities Friday, following the flood of the St. Joseph River that began Tuesday afternoon.

The City of Niles has been working hand in hand with the Berrien County Emergency Management, and Berrien County officials report that the record setting levels of the St. Joseph River have crested and are now stable. County officials are monitoring the river levels over various stretches of roadways and infrastructure systems throughout the county.

A declaration of a state of emergency is the first step in tracking activities and damage in case the need would arise to request state or federal assistance.

The City of Niles released a statement at 2:30 p.m. Friday announcing the decision.

“A State of Emergency can exist when the local unit of government has exceeded its reserves of equipment, manpower, and/or financial ability to address the situation,” the press release stated.

At a press conference Thursday, Niles Utilities Manager Jeff Dunlap said the city’s wastewater treatment plant had taken on significant water, and Niles Dial-A-Ride Transit was flooded as a result of the rising waters. DART services were moved to the Niles Law Enforcement Complex at 1600 Silverbrook Ave., Niles.

In the declaration of the state of emergency, Niles mayor Nick Shelton said the historic flooding was caused by quickly melting snow pack and heavy rains.

“The St. Joseph River crested in the City of Niles at 17.333 feet on Feb. 22,” Shelton stated in the declaration. “This is 2.23 feet higher than the previous record of 15.1 feet. GIS mapping of this event indicates that this event exceeds flood maps depicting a 500-year event.

“The City of Niles reasonably believes that we will exhaust local resources of equipment, manpower and finances during this historic event and its aftermath.”

Following an assessment with Berrien County Emergency Management, the City of Niles determined that “the manpower needs and costs exceed local reserves for such emergencies.”

Beginning Monday, Niles city and Berrien County staff will carry out property loss assessments for every property affected by floodwaters.

“This information will be used to assess the total financial loss to the community and to evaluate the property owners’ and the city’s eligibility for financial assistance,” read the press release. “If you own property in the affected area, the city would greatly appreciate your cooperation with this process so that it can be completed within the allowable timeline.”

One minute after the city of Niles declared a state of emergency, the Berrien County Board of Commissioners followed suit.

“This Declaration of a Local State of Emergency is a formality that allows the local municipalities to utilize County of Berrien resources in their recovery and damage assessments as a result of the natural disaster,” read a press release on behalf of the Berrien County Sheriff’s Department.

The sheriff said the high volume of damage throughout Berrien County is placing a strain on county resources caused by the natural disaster.

“The Local State of Emergency will be forwarded to the State of Michigan in an attempt to make state resources available to the County of Berrien and the local communities that are being affected by the flooding and the damage caused by this natural disaster.”