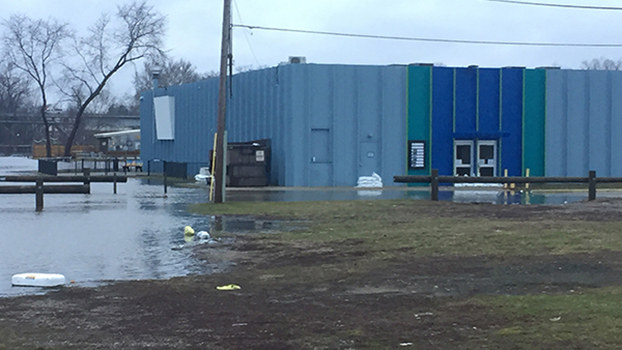 NILES — The Wonderland Cinema closed Wednesday due to rising water from the St. Joseph River, which has flooded Riverfront Park and reached the theater.

“We deleted all showtimes [Wednesday and Thursday]. We are just going to wait and see how long until the river crests and what everything looks like then,” said Carol Moore, owner of Wonderland Cinema and Moore Theaters. “We’re closed. We’re sandbagged shut.”

As of 9 a.m. the St. Joseph River in Niles had a crest of 15.86 feet, shattering the record of 15.1 feet set in 1950. According to weather.gov, the river was expected to keep rising until 7 a.m. Thursday, reaching 16.5 feet. Further estimates from the City of Niles predict that it will crest at 16.9 feet.

“It is a concern, for sure, that it could continue to rise and could get into the building and things,” Moore said. “We tried to get anything near the floor [off the ground] last night. Of course, the projectors are pretty high, so we’re not worried about them getting damaged, but it is still a very serious concern. We’d like to be open and operating business.”

Workers at Wonderland Cinema began filling sandbags at around 11:30 p.m. Tuesday, as the final movie showings were ending. At that moment, the river’s crest was 14.32 feet and by the time the workers finished at around 5:30 a.m., the water had already reached 15.54 feet.

Moore is unsure if the Wonderland will be open this weekend.

“They keep changing [their predictions for] when the river is going to crest,” Moore said. “And then, even after it crests, it’s going to take some time for it to recede, so we’ll just have to wait and see.

The city of Niles anticipates that it will not be until Monday or Tuesday before the river recedes enough to allow closed roadways to open.  As of 6:40 a.m. Wednesday, the forecast for the St. Joseph River on weather.gov predicts that the water will still be at 13 feet at 1 a.m. on Wednesday, Feb. 28. The river is considered to be in a “flood stage” at 11 feet.

Moore says that even though it hurts to be closed on a Wednesday and Thursday, there will be a greater impact on her business if she is unable to be open for weekend showings.

“People come all the time to the movies and we appreciate all of the following and the patronage, so every day we’re closed, it’s a loss,” she said.