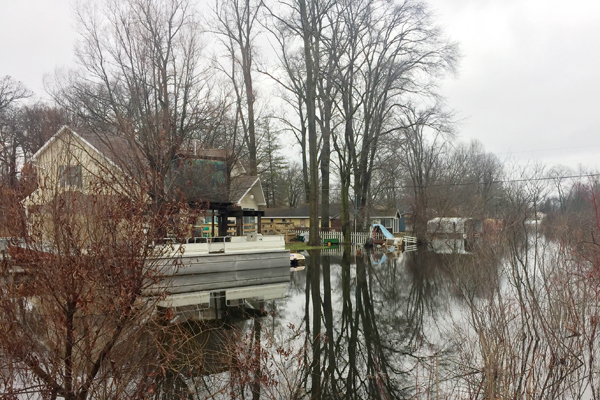 EDWARDSBURG — The heavy rain and melting snow from earlier this week has caused the water level in Garver Lake to rise above seawall, engulfing the backyards of many residents. This has caused the trash, debris and children’s toys to be swept up in the lake, while basements are at risk for flooding and structure of houses are tested.
“What we experienced here is kind of like the perfect storm,” said Bruce Campbell, rain commissioner for Cass County. “We had quite a bit of snowfall in the county, then all of a sudden it got unusually warm and a lot of rainfall.”
Tom Blume, who has lived on Garver Lake for his whole life, spent part of yesterday driving around the lake, checking on the properties of a few other residents who were unable to manage the flood water themselves.
“A lot of people like buying on the lake up here and then they go to Florida or Arizona for the winter,” Blume said.
Fortunately for his neighbors, Blume was home when the water began to rise, and he was able to look after other people’s homes. His property is on the high portion of the lake, so he has not had to deal with much flooding.
“I’m just being a good neighbor and good friend,” Blume said. “I like helping them when they are need, especially with them being gone. Otherwise, they’d have to hire someone to watch their house.”
The first house he stopped at was for his friend who is visiting a daughter out of town. They were worried that they might need to come back early, but Blume said he has it under control
Here he was setting up an extra pipe and motor for the house’s crawl space, which earlier in the morning had been flooded with water.
“I’m just making a spare,” Blume said. “I don’t know how long those motors can take that kind of running. That’s the thing: making sure everything keeps running. You don’t get a break. This [water] just isn’t going away in a short period of time.”
Around the back of his friend’s house, the water is touching the deck. The next-door neighbor has it even worse, with water from the lake surrounding the majority of the house.
Next Blume headed to his sister’s house, which is on the south side of the lake. Even though it is across the street, and not actually on the lake, she is still at risk for flood damage. Little water has entered her basement, and Blume has three pumps running to make sure it stays that way.
According to Edwardsburg Farm Bureau Insurance agent Tony Gaideski, anyone who does experience flood damage to their home or basement should contact their insurance agent immediately to make sure that they are covered. Additionally, it may take some time to get an adjuster to someone’s house due to a potentially high volume of claims given the recent weather.
Just south of Blume’s sister is the channel that connects Garver Lake to Cobus Creek. Water is draining from the lake quickly but that just means this excess water is going to be someone else’s problem, as Cobus Creek flows south and eventually empties St. Joseph River near just outside of Elkhart.
“The thing is, Niles is going to get this water when it dumps into the St. Joe,” Blume said.
Essentially, all the water in the county will eventually flows to the river.
“All three of the main watersheds in the county are part of a bigger watershed, which is the St. Joe River watershed, and that then empties into Lake Michigan up by St. Joe and Benton Harbor,” Campbell said.