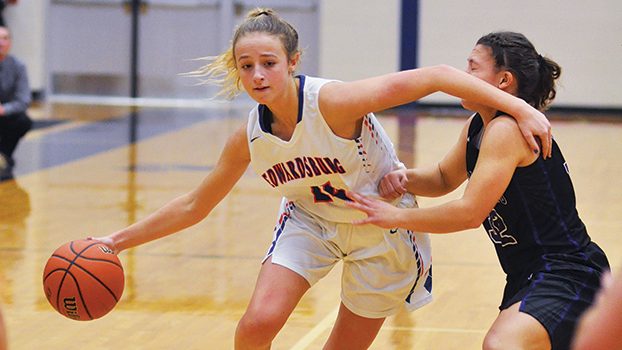 EDWARDSBURG — Edwardsburg was one of the favorites to win the district championship in 2017, but the Eddies were upset by Three Rivers 41-32 in the title game.

The Eddies and the Wildcats appear to be headed toward another showdown in this year’s district tournament at Paw Paw.

Edwardsburg (17-1) will face host Paw Paw (5-13) in the semifinals Wednesday night after both teams received a first-round bye.

In the other half of the bracket, Three Rivers will face arch rival Vicksburg in the opening game Monday night with the winner advancing to the semifinals to face Dowagiac (4-14) at 5:30 p.m. Wednesday.

The championship game will be played at 7 p.m. March 2.

“When it comes to districts, you have to throw everything out the window because anything can happen and everyone has a chance,” Edwardsburg coach Jon Pobuda said. “With that being said, all the teams are very well coached, but Three Rivers has had a very good season and will be a difficult match-up for anyone in districts.”

Pobuda knows that his team has high expectations and that if it wants to be champions, it must pay attention to every detail.

“If we want to advance past the opening round, we have to be ready to play and do the little things we have done all season,” he said. “It’s one day at a time, no excuses, show up ready to play and I think we will do that. Our district is tough because we are seeing everyone for a third time and it’s hard to beat good teams three times. We are going to have to be at our best if we want to win. Everyone wants to beat us and we continue to get everyone’s best effort. We have had a great season, but we want the district championship.”

The Chieftains will have a much different roster heading into the district tournament as several players missed the final regular season games due to an undisclosed reason.

No matter who takes the court for Dowagiac Wednesday night, Chieftain coach Brent Nate knows his team will have to do everyone right to be competitive.

Dowagiac has faced each opponent multiple times, which allows the Chieftains the ability to make adjustments based on those games.

“We’ve faced everyone in our district multiple times, so we understand their personnel and what they will try to do against us,” Nate said. “The tournament is about being the better team that night. It’s not an NBA best of type thing. We just have to beat them one time and advance.”

Tickets for all district games are $5 per person and no passes will be accepted per the Michigan High School Athletic Association.

The regular season for Michigan girls basketball comes to an end this week and the postseason begins Monday at various sites throughout southwest Michigan.

The Cassopolis Rangers will play in the Class C district tournament being hosted by Brandywine in Niles.

The Rangers (8-7) will host Bridgman in the opening round of the tournament at 7 p.m. Monday.

The winner advances to the semifinals at Brandywine High School Wednesday night where it will take on Hartford (16-3), which received a first-round bye. That game is scheduled for 8 p.m.

The championship match is scheduled for 7 p.m. March 2.

Cassopolis has played everyone in the district field with the exception of host Brandywine, Watervliet and Bridgman.

The Rangers are 2-0 against Eau Claire, one of which was a forfeit, and 0-2 against Hartford.

Ranger coach Janice Gatson said that Brandywine and Hartford were the teams to beat.

She knows that her team will have to play one of its best games of the year to have a shot at the district title.

“The keys to getting past the first round are discipline, hard work, handle ball pressure and free throws,” she said. “To win the district championship we will need to be able to handle pressure, take care of the ball and execute on offense.”

The Rangers have had an up and down regular season, but Gatson is hopeful that it has gotten her team ready Monday.

“The season has prepared the team for the state tournament because they have experienced injury, sickness, lack of teamwork, and have been able to rise above all other situations that have been thrown their way,” she said.