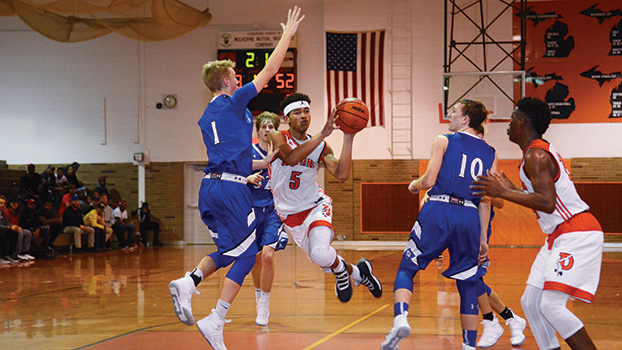 Chieftains hold on against Trojans

DOWAGIAC — The Dowagiac basketball program honored its seniors prior to its Wolverine Conference non-divisional clash with visiting Plainwell Tuesday night.

And it was senior J.J. Smith that delivered in the clutch to keep the Chieftains atop the conference standings.

Smith scored 10 of his team-high 18 points, all of which came in the second half, as Dowagiac held off a late Plainwell charge to win 65-63 in a wild affair.

“The guys did well tonight and battled down to the end,” said Dowagiac coach Danum Hunt. “They stepped up when we needed to step up defensively. We had some lulls tonight, but the guys were able come together and get the job done.”

Dowagiac was assessed a pair of bench technical, which means the head coach is disqualified from the game. Hunt will also have to miss Friday night’s Wolverine non-divisional match up against Paw Paw.

The Trojans, 9-8, opened the game attacking the basket before kicking it out to its perimeter shooters. The plan worked well as they were able to keep the Chieftains off balanced.

Plainwell led 17-13 after the opening eight minutes and 36-30 at halftime.

Dowagiac regrouped during the intermission and turned up its pressure and began attacking the basket themselves.

With Smith and fellow senior Caleb Murphy working in the paint, the Chieftains were able to outscore Plainwell 16-9 in the third quarter to take a 46-45 lead into the final eight minutes.

Dowagiac (13-4) continued to build on its advantage, which reached double figures with just over three minutes remaining.

The game got out of hand at that point with pushing and shoving, words being exchanged between the two teams and two of the Chieftains’ three technical begin assessed, which allowed the Trojans to go to the foul line again and again.

Plainwell shot 16 of its 23 foul shots in the final quarter, but unfortunately for them only connected on nine of them, which allowed Dowagiac to escape with the victory.

A late basket by Murphy turned out to be the difference in the contest.

One of the big differences in the contest was the Chieftains’ nine 3-point baskets compared to just three for Plainwell, which had 20 2-point field goals compared to 19 for Dowagiac.

In addition to Smith, the Chieftains had Shaquan Stanback with 13 points, Jamin Hunt with 11 and Murphy with 10.

“We knew Morrell was going to be a tough stop, but the thing was we have to shut down everybody else,” Hunt said.” But we allowed Finch to get off a little bit and that was not part of the game plan. Plainwell is a tough team. They always come in and play tough. They are tough competitors.

Allie Conner scored a team-high eight points for Dowagiac, which also got seven points from Hayden First and six points from Tania Parker-Wilson.

Niles woman seeks to restore Summer Concerts in the Park

NILES — When Caryn Adler was a child growing up in Niles, her family used to spend one summer evening... read more