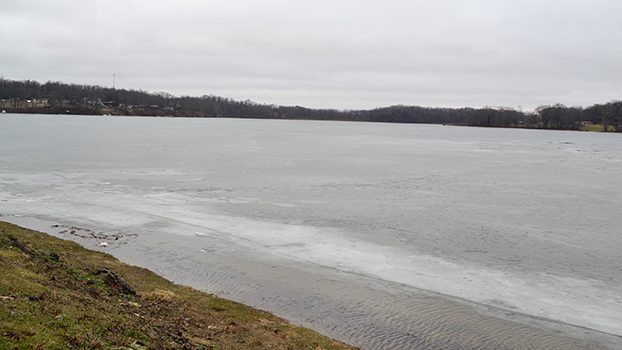 CASS COUNTY — After heavy rains Tuesday, communities across Cass County are dealing with the fallout.

Rain and melting snow have caused flooding concerns throughout the county. Rising waters have affected businesses and government operations, closed schools and led to road closures. In some areas, the roads were completely impassable, as was the case on Tharpe Lake Road Wednesday morning, when a woman had to be rescued from her vehicle by police officers.

Though many Cass County communities say they have the issue under control for the moment, some worry that predicted rainfall Friday and Saturday may not allow the water to abate and cause more flooding.

“We’ve had localized flooding. The roads are flooded, mostly in the southern part of the county,” said Cass County Sheriff Richard Behnke. “We have had roadways damaged, closed and washed out. … One problem we had was with road closed signs. The road commission began to run low on them.”

As rain fell overnight Tuesday, sheriff’s deputies spent the night assisting those whose vehicles had been damaged by driving through puddles of rainwater.

Despite having areas of flooding, there have been no reports of injuries, according to Behnke.

With more rain expected over the weekend, Behnke said the county is concerned about more potential flooding, but that he is hoping the water recedes enough Thursday to make it a non-issue.

“It’s not overwhelming [for the Sheriff’s Office to deal with the flooding],” Behnke said about the amount of flooding the county had seen by Wednesday morning. “But it is overwhelming for the person it is happening to at the time. You want to stay out of that situation by not going around road closed signs and when you see water over the road, you might want to turn around and find a different route.”

Individual communities in Cass County have been experiencing the weather differently. Despite high water reported to be invaded the yards of those living on Christiana and Garver lakes in Edwardsburg and Ontwa Township, no major issues have been reported, according to Ontwa Township Wastewater Administrator Scott Swanson.

Cassopolis has had a few cases of flooded areas, one of which is surrounding a brand new wastewater lift station, which is causing village officials concern, according to Superintendent of Public Works Ben Anderson.

“We are currently trying to make a plan to deal [with the water],” Anderson said. “We are crossing our fingers that the water recedes and it doesn’t go over the lid.”

In Dowagiac, city officials said that the city is not experiencing many complications from the weather as public services employees have spent the last week clearing snow and ice off of drains in order to keep the roads from flooding.

“We had a few issues with puddling, but once we dealt with the clog issue things got flowing pretty well,” said Dowagiac’s Director of Public Services Chad Tyrakowski. “I was quite happy with how things played out considering how much rain we got in such a such a small amount of time.”

Tyrakowski said that public services will continue to clear the snow and ice from city drains in order to keep the streets clear of water.

More than just flooding, the freezing and thawing conditions of the weather over the next week can lead to unsafe roads by creating potholes and icy conditions, Tyrakowski said.

“The freeze cycle always wreaks havoc on the roads, creating potholes and things like that,” he said. “So far, we have laid about three tons of asphalt to fill the holes and we are going to continue at it.”

“[A flooded home] is not really a 911 call unless someone’s life is in danger,” Behnke said. “But you never know how water can affect a home.”

Behnke also warned that with the freezing and thawing conditions that any ice remaining on lakes and waterways will be thin and unsafe to walk on.

In the case of potentially icy roads over the next week, Dowagiac and Cass County officials urged residents to drive safely and use caution.

“Be aware we have a lot of standing water and that can freeze,” Behnke said. “Don’t try to negotiate that.”

NILES — The Wonderland Cinema closed Wednesday due to rising water from the St. Joseph River, which has flooded Riverfront... read more