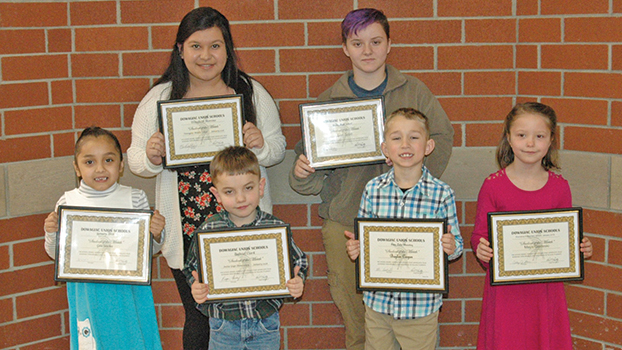 Students of the month announced

DOWAGIAC — A room in Dowagiac Middle School was filled with beaming parents and family members Monday evening, as several students were recognized by the school district.

Monday, the Dowagiac Board of Education announced the district’s students of the month. One student was chosen from each school after a nomination from a staff member. Each student of the month received a framed certificate and a T-shirt with their name printed on it.

From Union High School, senior Lexi Scott was chosen as the student of the month. Scott was nominated as student of the month by her art teacher Courtney Dwyer. Though Dwyer was not in attendance at Monday’s meeting, she wrote a letter that was read aloud by school principal Kelly Millin, about why Scott was deserving of the award.

“Lexi is an excellent choice for student of the month. She is a wonderful representative of our school. I feel she will be successful in anything she chooses to do,” Dwyer wrote. “Lexi is always going to help others. She is a kind and trustworthy person. She is responsible. She shows integrity. She has gained 21st Century skills that will help her to succeed past high school.”

First-grader Maya Gaideski was chosen as the student of the month for Kincheloe Elementary. She was nominated for the award by her teacher Tami Smalls.

“I’m very proud of her,” Smalls said of Gaideski. “She is an absolute doll in my class. When she comes in, she is always happy. She works the hardest I’ve ever seen. She keeps on task. When she struggles with reading or something is hard for her, she always asks for help. … She is a nice young student who helps out the other kids in the class.”

Eighth-grader Elizabeth Moreno was chosen as the student of the month from Dowagiac Middle School. She was nominated by her teacher Andrew Hackett.

Middle School Principal Sean Wightman spoke about why Moreno deserved the award at the board of education meeting.

“Lizzy said the thing she likes most about Dowagiac Middle School is how she learns new things every day,” Wightman said. “Mr. Hackett said that Elizabeth is a hard worker who is always willing to lend a helping hand to those who are in need of it. … I’m always confident she will do her best every day.”

Gala Sanchez was chosen as the student of the month from Patrick Hamilton Elementary, after a nomination from her teacher Jon Leazenby.

“She is so respectful. If I ask her to do something, she is always going to do more than I ask her do,” Leazenby said of Sanchez. “She is always focused. … I know I can count no at least Gala to be paying attention.”

Gabe Clark was chosen as the student of the month for Justus Gage Elementary. He was nominated by his teacher Nancy Northrop.

“Gabe is a very hard working first grader,” Northrop wrote of Clark. “He especially likes science and learning about being an engineer.”

Finally, Baylon Cooper was chosen as the student of the month from Sister Lakes Elementary. He was nominated by his teacher Lorenne Witham.

“[Cooper] is a phenomenal citizen of the classroom and he is a nice friend to everyone,” said Justus Gage Principal Bryan Henry. “He is a role model for all our students in the class room. He shows tremendous respect and responsibility.”

The board ended their Monday meeting after a round of applause for the students and an expression of congratulations.

DOWAGIAC — The rain patters down on the windows of WHOkNEW? consignment shop in downtown Dowagiac just after opening Tuesday... read more