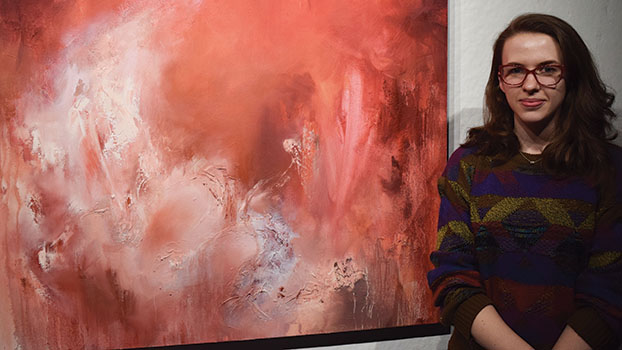 SMC alumna Jessika Clement posed next to one of her paintings, debuted during an art gallery opening. (Submitted photo)

The art gallery’s interior wall was moved to make the rear gallery as big a space as the front gallery in Room 108 of the Dale A. Lyons Building on the Dowagiac campus.

The new floor plan will allow the gallery to be used as a more flexible learning space for students in all fields of study, including the Honors Program, while also functioning as an arts-based incubator to promote emerging artists and to help develop trans-disciplinary projects at the college.

The renovation was a group effort among college administration, maintenance personnel and visual arts faculty, who worked together for over a year to find the best balance of modern aesthetic and lighting in the most fiscally responsible manner.

“[SMC President Dr. David Mathews’] design to push back that wall in the rear gallery was awesome,” Dombrosky said, crediting neutral flooring and mutable lighting to John Eberhard, who leads the Buildings and Grounds Department.

“He’s a genius! I understand the new doors for gallery storage were repurposed from the nursing wing,” Dombrosky said. “We were able to re-use the existing track light and add more in the back room, then re-lamp older cans/track heads with 4000K LED lights.”

Mathews, who selected Clement’s self-portrait for a President’s Award back in December 2013’s student art exhibit, said he was proud of the new space.

“I cannot conceive of a better way to showcase this gallery,” Mathews said. “To display any of these pieces you would want a lighted white expanse with a neutral floor. If we wanted to sell this gallery, we’d ask you to come put your stuff up again.”

Clement, from Edwardsburg, graduated from SMC in 2014. She now lives in Grand Rapids since finishing her degrees at Kendall College of Art and Design of Ferris State University. The former portrait painter, who transitioned to abstracts about a year ago, numbers her untitled paintings, the largest of which stands five feet tall.

“I definitely take some rage out painting,” Clement said. “[There is an] emotional turbulence that comes through in the emotional process creating images of turmoil.”

The series “suggests illusions of other-worldly passages,” she said.

“The process of gestural abstraction mimics the ephemeral nature of atmosphere,” Clement said. “Dynamic slashes of paint contrast with soft brush marks, while bright colors, illuminated by Baroque-inspired lighting, emerge from the depths of darkness. The exchanges are crucial in seduction incited by tension.”

“The Generous Deceit of Elusive Darkness” is open through March 1. Gallery hours are 10 a.m. to 3 p.m. Monday to Thursday.

Next up, from March 5 to April 5, will be an exhibit called “Chem Lab,” featuring Dr. Douglas Schauer of SMC’s chemistry faculty.