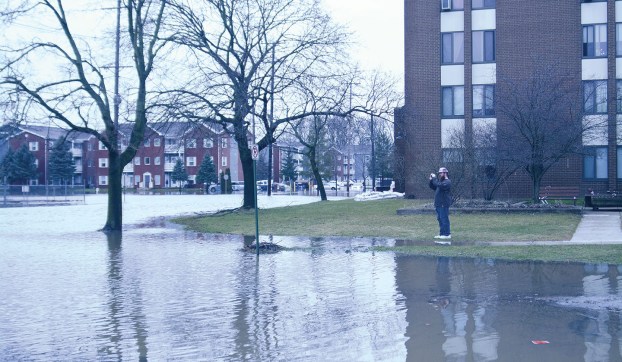 Water began spilling over the banks Tuesday afternoon and by Wednesday morning, many Niles residents were dealing with high waters, which inundated a number of Niles roads, businesses, homes and parking lots.

According to City Administrator Ric Huff, barricaded roads included parts of Front, Second, Bond, Ferry, Cass and Howard streets. He advised all residents to be mindful of barricades and not jeopardize their safety by driving or walking through the water.

Huff said residents cannot be sure what is below the surface of the water. He also said with flooding in multiple areas, the water could become contaminated.

Around 9:15 a.m. Wednesday, the Niles Fire Department responded to the Parkview Apartment complex, where a man with Parkinson’s Disease had become trapped in his car, after attempting to drive through the flooded parking lot.

The man, who was approximated to be in his 60s, was rescued without incident. Niles Fire Department Lt. Bill McAllister said the man was cold, because of the water that had poured into his car, but that he was otherwise expected to recover from the incident. The man was taken to the hospital for further inspection, McAllister said.

McAllister said that was the third call the authorities had responded to that morning involving a person who had become trapped after trying to drive through high water.

Many residents between Front and Cass streets dealt with flooded parking lots, which submerged some cars. McAllister recommended that residents not risk their safety to try and reach their cars.

“If you can leave your vehicle there, leave it there,” McAllister said. “Stay inside if you can.”

Homes along Phoenix and River streets, as well as N. Front Street, were impacted by flooding, Huff said. At least three families in Niles had called available resources for shelter assistance by Wednesday morning. Huff said more than three families had likely been displaced, but those residents found other means of shelter.

Just down the street, Cloudy Jennings captured photographs of the flood waters, which stretched across the parking lot at Save-A-Lot, 410 N. Second St.

“I have never seen anything like this,” Jennings said of the flooding.

Jennings said he lives across the street at the Niles Housing Commission apartments, where the parking lot was also flooded. Jennings said he is a maintenance worker at Save-A-Lot and employees had been putting sandbags around the building to try and stop the water. At that time, he said no water had breached the inside of the building.

Others observed the teeming waters with interest Wednesday morning. Kristine Watson, of Buchanan, also captured the flooded streets with her phone.

“I have just never seen anything like this before,” Watson said.

Watson said she has lived in Buchanan since 1987. She works for Lake Michigan College’s Niles campus. Due to the flooding, Watson said the campus had been closed and she was given the day off. Watson said she had spent her morning at the Niles-Buchanan YMCA instead.

For a list of Berrien County road closures, visit bcroad.org and click on the top link for a map.

Michiana is on alert for flooding through Wednesday afternoon, according to the National Weather Service, as heavy rainfall, melting snow... read more