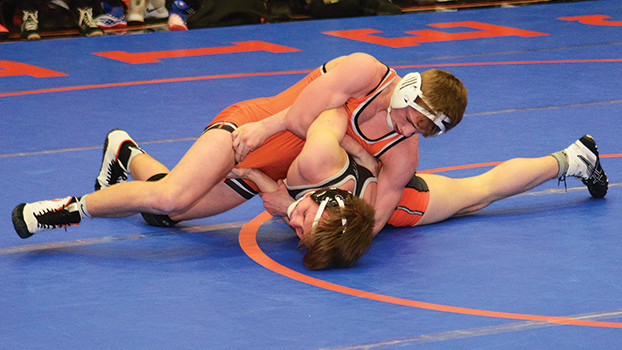 NILES — Four area wrestlers captured championships at various sites as the individual state tournament moved into the regional round Saturday.

For the Vikings’ Franco,  who improved to 40-0 on the season and 159-5 for his career, this will be the fourth consecutive trip to the state finals.

The Vikings advanced seven wrestlers to the Division 2 state finals, which will be March 2-3 at Ford Field in Detroit, while Edwardsburg advances four wrestlers.

Franco pinned his way to the finals. He stuck Andrew Minterfering of Jackson Northwest in 2:28 in the opening round before sticking Edwardsburg’s Jacob Reece in 40 seconds in the semifinals.

Simpson captured the 171-pound championship by pinning Austin Tapley of Jackson Northwest in 3:48 and blanking Anthony Williams of Charlotte 4-0 in the semifinals.

Smith reached the title match by edging Chandler Murton of DeWitt 3-0 in the first round and decisioning Hunter Wilson of Fowlerville 9-2 in the semifinals.

Bruckner was pinned by Mattawan’s Ray Atkinson in the 189-pound finals in 3:52.

DOWAGIAC — The Dowagiac wrestling team received a No. 6 seed for the Division 3 state wrestling quarterfinals at Wings... read more