Buchanan honors champions, The Herd puts on a show for MHSAA 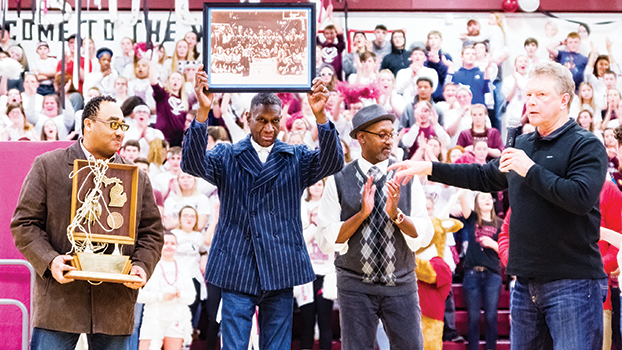 BUCHANAN — It was like a live action television show made its way into Buchanan Friday night.

“I’m not quite sure there was a basketball game played tonight,” said Buchanan Coach Reid McBeth.

And many fans probably had the same thought as well.

The Herd was in full voice during Friday night’s game against Berrien Springs. (Leader photo/TIMOTHY RITTER)

Because not only did the Bucks host Berrien Springs in BCS Athletic Conference Red Division boys action Friday night, the Buchanan seniors were honored, the Michigan High School Athletic Association had its representative council attend for Battle of the Fans, and the 1977-78 Buchanan Class C state championship boys basketball team was honored for its 40th anniversary.

By that time, the gymnasium was already packed, including the Buchanan student section.

The Herd, as the Buchanan student section is called, held nothing back in their quest to be named the 2018 MHSAA Battle of the Fans champions.

And fun they had.

Joining the fun was a student section for the Little Herd, who were with them every step of the way. The Herd chanted, sang and danced the night away during the game and during timeouts.

Oh, and as for the basketball game, the Bucks defeated the Shamrocks 64-45.

Continuing the first quarter trend, the Bucks increased their lead to 36-23 at halftime.

The rest of the night’s events took place during an extended halftime session starting with The Herd putting on a six-and a-half-minute song and dance show for the MHSAA representative council.

Including songs such as Neil Diamond’s “Sweet Caroline” and two massive conga lines that stretched the outside of the basketball court during Harry Belafonte’s “Jump in the Line,” The Herd gave an excellent introduction to what happened next.

The 1977-1978 Class C state champion Buchanan Bucks were honored in a 20-minute ceremony and rekindled memories of the high flying dunks from yesteryear by Mo Kyles and Gerald Busby and the 13,000 plus fans spectators who watched the Class C Final at the University of Michigan’s Crisler Arena.

That 1978 final was the only one that was sold out as the Bucks defeated Saginaw Saints Peter and Paul and finished 27-1.

Coach Mike Rouse talked about what it was like to coach the boys using a team first approach, with everyone having their role within the team.

Rouse and the team gave Buchanan High School a couple of gifts to go along with the state trophy currently housed at the school.

The Bucks were able to cut down the nets at the district and regional championships, however they were not allowed to cut the state championship net down after the win.

But that didn’t stop Buchanan as they waited for the fans and security to leave the court, then they cut them down.

Ronnie Williams, the captain for the Bucks at the time, still had the net from the final and dressed it over the trophy during the ceremony.

Another photo, a preseason team shot shows the Bucks in leisure suits jammed in a Chrysler car. This photo represented where they were going and those who wanted a ride are welcome to join, also joining the trophy in the walls.

The old basketball center court “B,” salvaged by Todd Cornwell after the floor was replaced, was also given to the school as well.

The Shamrocks outscored the Bucks 16-14 in the third quarter, but couldn’t find any way to break the double-digit lead.

The Bucks’ defense stood tall in the fourth quarter and only allowed six points as Buchanan improved to to 9-7 on the season.

The Bucks travel to Bridgman on Tuesday for a makeup game.