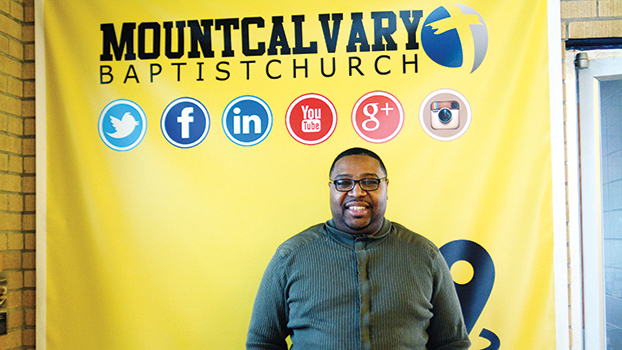 The final person in our series for Black History Month was recommended by readers as an influential leader through the work he does as a pastor and advocate for the community of Niles.

Standing at the pulpit and looking out over the pews, Bacon tries to convey lessons in worship that will rejuvenate those in the audience for the week to come.

“The better we become, the better we can make people around us,” Bacon said. “I think that actually changes a culture. My goal is always to encourage people, equip them and engage them to go out and do what they were taught.”

This Sunday will be no different, except Bacon will join other churches in celebrating Black History Month starting at 1 p.m. Sunday at Mt. Calvary Baptist Church, 601 Ferry St. Those who attend will hear readings from the works of historical African American figures, as well as musical presentations. Following the program, participants can enjoy a soul food dinner.

While Bacon looks forward to celebrating the event Sunday, he said black history should be celebrated throughout the year.

“To me black history is every day,” Bacon said. “I think it is something that we need to remind ourselves of on daily basis.”

Bacon has often helped the community to remember the importance of African American leaders. Last year, he spoke during a Martin Luther King Day celebration. As he spoke to the crowd gathered in the basement, he recalled King’s mission to use peaceful tactics to inspire his messages of equality and he encouraged those in attendance that day to do the same.

Inspiring others has often been a mission during his tenure as pastor. Bacon said he is most proud of the outreach that his church has provided to the community of Niles. Of those projects, Bacon said providing a community food pantry called Helping Hands is an example.

“That’s one of the areas right there that has been a consistent outreach for us,” Bacon said.

Additionally, he said they have a clothing ministry where people in need can find clothing for children and adults. In some instances, the clothing ministry has served those in the Niles community who lost their home to a fire or other tragedy.

“We always have quite a bit of clothing on hand to help out,” Bacon said. “That is something we are very good at, is consistently making ourselves available with that particular outreach.”

For the past two years, Bacon has served as a board member for the Benton Harbor-based Mosaic Christian Community Development Association. The organization seeks to help formerly incarcerated people acquire life skills and employment. Those in the program can take classes to help them make this transition. Bacon has spent the past two years advocating to bring the program to the Niles area. The project is still in the works, but Bacon said he hopes to make it a reality within the next couple of years.

Bacon said he began to feel the calling to be a pastor at the age of 22, but it took him several years to answer the call.

Prior to working as a pastor, Bacon said he worked in human resources, but felt that his life’s purpose was not being fulfilled through his work. He decided to leave his job in the human resources field to pursue being a pastor. Today, Bacon said his role as pastor has become more than just a job.

“It is very fulfilling,” Bacon said. “Being a pastor is not something that I do, it is who I am. Now I see what I do as my life goal and my life purpose.”

In addition to serving as pastor, the Mosaic board and the Baptist district for part of Michigan, Bacon and his wife, Monica live in Niles. They have three children Bryant Bacon II, 28, Bryce Bacon, 5 and Bryden, 1.

NILES — Since 1909, the NAACP organization has banded people together to address civil rights issues. Those who became part... read more