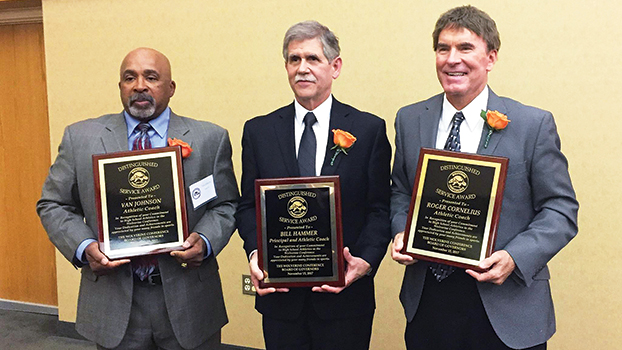 KALAMAZOO — Van Johnson of Dowagiac, Bill Hammer of Allegan and Roger Cornelius of Gull Lake where honored by the Wolverine Conference with its Distinguished Service Award its annual banquet last fall at Western Michigan University.

Johnson was honored for his many years of coaching golf at Dowagiac. He also coached track for the Chieftains.

Johnson was elected into the Michigan Interscholastic Coaches Association Hall of Fame in 2013.

Hammer coached cross country and track at Allegan, while Cornelius was the Gull Lake tennis coach.

Edwardsburg’s Jon Pobuda and Jesse Becraft were honored for girls basketball and wrestling, while the Eddies’ Sean Jesse shared the boys soccer honor with Garry Snyder of Plainwell.

Former South Haven baseball, football and wrestling coach Jim McCloughan, who was awarded the National Congressional Medal of Honor in 2017, was the special guest.

COACH OF THE YEAR

Cassie Klingerman is a junior on the Niles girls basketball team. What has been one of your greatest accomplishments as... read more