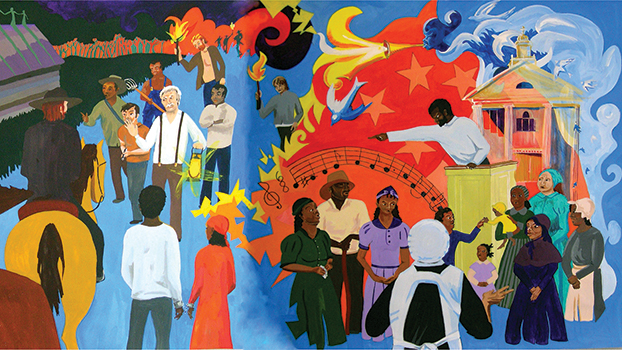 A mural from downtown Cassopolis depicts the Kentucky Raid. It is titled Sanctuary and Deliverance in Cass County. (Artwork courtesy of Ruth Andrews)

VANDALIA — While far removed from the plantations of the slavery-era South, Cass County played an important role in the history of the abolitionist movement during the mid 1800s.

The stories of the escaped slaves and those who harbored them during their flights North toward freedom have been documented and preserved by the dedicated members of the Underground Railroad Society of Cass County.

In celebration of Black History Month this February, Cathy LaPointe, treasurer and founding member of the URSCC, will feature a series of four articles that highlight the story of the Underground Railroad in Vandalia and other local communities.

By the mid 1840s, the area around Vandalia was home to several large farms owned by Quaker families who were part of the Underground Railroad. While most freedom seekers only stayed long enough to rest and gather provision for the next leg of their journey, some stayed to work for a time on these farms, residing in cabins on the properties.

Freedom seeker Perry Sanford, along with several others, escaped from Kenton County, Kentucky, crossed the Ohio River and made the journey to Cass County via the Quaker Trail of the UGRR in April of 1847. He and other members of his party were staying in a cabin on the Stephen Bogue farm. Other freedom seekers were staying in cabins on the Osborn and East farms.

On Aug. 17 of that same year, 13 heavily armed Kentucky slave catchers broke into three parties. They were to rendezvous at O’Dells Mill in Vandalia. Two slave catcher parties raided the Osborn and East farms, and a cabin on Zachariah Shugart’s property, kidnapping six freedom seekers. The third party went to the Bogue cabin, where they captured three slaves. Perry Sanford escaped out the shake roof to warn Stephen Bogue. Hannah Bogue hid Perry upstairs in the house. Perry’s friend, Rube Stevens, ran to Quaker William Jones farm less than a mile away. Unarmed, William Jones calmed the situation and kept the slave catchers in place until Stephen Bogue returned with a group of men from Cassopolis.

The Kentuckians with their kidnapped slaves met at O’Dells Mill. By this time there was an angry crowd estimated at around 200 surrounding them, saying they were not going to take the freedom seekers back to Kentucky. They decided to settle the matter in court in Cassopolis, about three miles away.

The trial spanned three days. The judge, Ebenezer McIlvain, was a secret abolitionist from Niles. He allowed freedom seekers to testify in court and found for them on a technicality. He asked the Kentuckians to prove Kentucky was a slave state by showing him a copy of the state constitution. By the time they could produce it, all the freedom seekers were spirited out of town on the Underground Railroad. The Kentuckians went home empty handed.

In 1849 they sued seven Quakers and two others in District Court in Detroit for the value of their slaves, but the trial ended in a hung jury. The case was later settled and dismissed, but court costs were high and some of the defendants had to sell their farms and leave the area.

The Kentucky Raid and ensuing trials incensed southern planters. They demanded a more stringent Fugitive Slave Law, enacted in 1850, making it much more dangerous for freedom seekers and those who helped them. This law was a factor in the lead up to the Civil War.

Perry Sanford stayed in Battle Creek, where years later he gave his account of the Kentucky Raid to a reporter for the Morning Call.