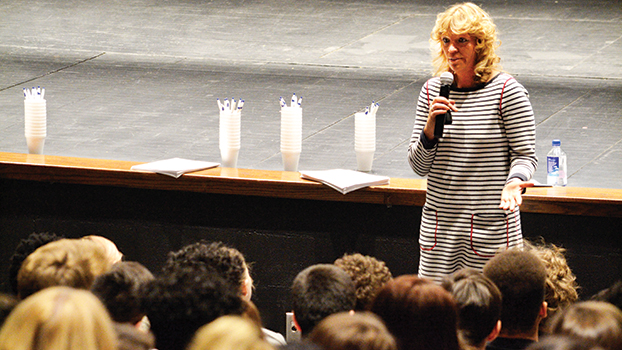 “I think they were surprised and a little skeptical at first,” Sarratore said, “but by the end of our discussion with them they were really excited about something happening downtown and that they will be able to be a part of that.”

This announcement comes after Cassopolis Public Schools applied for a $100,000 rural development grant last month, which, if awarded, will be used to help fund the student-designed and managed coffee shop. This is part of the district’s initiative to provide more project-based learning opportunities for its students.

Another change that was discussed during the presentation was that, in the future, students will be given a one-to-one learning device such as a laptop or tablet.

Toward the end, students were handed styrofoam coffee cups and pens and asked to draw potential logo designs and names on them.

“That was a fun moment during our time together with the students to see their imaginations sparking,” Sarratore said. “I have [the styrofoam coffee cups] in my office and it’s on our to-do list this week is to compile all of the data that we received on the cups.”

Additionally, the district is putting together a student advisory board, consisting of two students each from eighth, ninth, 10th and 11th grade. Applications to be a part of the board were available at the end of the presentation.

VANDALIA — While far removed from the plantations of the slavery-era South, Cass County played an important role in the... read more