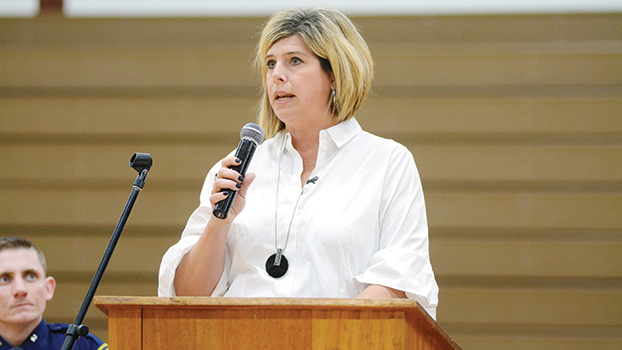 NILES TOWNSHIP ­— A Granger woman who lost two of her sons to acute alcohol and oxycodone consumption in 2015, and started a foundation in their honor, spoke to students at Brandywine Middle/High School Wednesday to spread awareness about prescription drug misuse and underage drinking.

Rebecca Savage told students about the day she woke up and discovered two of her sons, Nick, 19, and Jack, 18, dead in their Granger home on June 14, 2015. Her sons had both been at a party the night before to celebrate Jack’s graduation and they had returned home.

Savage said the morning after the party, she went to wake up Jack. She described how she had been moving about his room absentmindedly straightening things and asking if he could help his father with some chores. When Jack continued not to respond, Savage realized something was wrong.

“Those next few moments haunt me to this day,” Savage said. “My son was lifeless. He was lifeless as I was calling 911. Lifeless as I picked him up and laid him next to his bed to initiate CPR. Lifeless when the paramedics arrived.”

Savage was hit with another tragedy only moments after EMTs arrived, when her son, Nick, was also discovered lifeless in the basement, where he had been sleeping with friends.

Savage recalled begging for the paramedics not to give up resuscitating Jack and her confusion when the coroner was called to retrieve Nick. She then had to relay the news to her husband and her two younger sons.

Savage asked for the students in the audience to picture their own parents in this situation and the heartbreak that they would be caused if they found their son or daughter lifeless like Nick and Jack.

“I encourage all of you to take a stand, today and encourage others to do so as well,” Savage said. “[I want you to] understand what the consequences of underage drinking can cost you and your family. We have unfortunately learned that no family is immune to this.”

Before their deaths, Savage said her sons Nick and Jack had bright futures ahead. Both were honors students in their high school and led their hockey teams. Nick had just completed his first year of college, where he was earning a degree in microbiology.

“They were leaders. Captains of the sports team,” Savage said. “I guess my point is that these were smart kids, with bright futures, who made a bad choice.”

In the months after their deaths, Savage said she contemplated why her sons made the choices they did that night. She asked students to be cognizant of how underage drinking can impact a person’s decision-making process and ultimately lead to making a bad decision.

Savage also spoke to the severity of the opioid crisis in America and the number of families’ lives that were touched by the epidemic.

After her son’s deaths, Savage helped to start the 525 Foundation to spread awareness to youth and parents alike about the dangers of prescription drug misuse. She has shared her message on national television, including the Today Show with Megan Kelley and to multiple news agencies.

On Wednesday, some of Savage’s final words challenged students to take responsibility for their decisions and remember all the people those choices could impact.

“Nick and Jack are not here. Their dreams and their chances to make a difference in the lives of others and on earth are no longer a reality,” Savage said. “Think of all they lost. However, all of you are alive and able to complete the dreams you want. Do not [give in] to peer pressure.”

Students also heard from Michigan State Police Trooper Jesse Binns, who told students about a Michigan law that will protect them if they call the police to report that one of their peers has consumed drugs or alcohol and may need medical attention help.

Anonymous tips can also be submitted to “Ok2Say” by utilizing the mobile application or calling or texting. For more information: michigan.gov/ok2say/