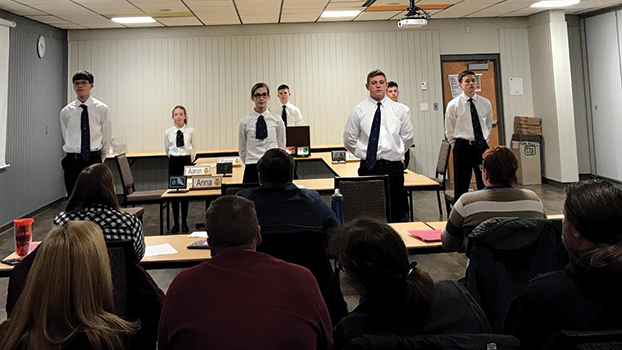 CASSOPOLIS — Several Cassopolis FFA teams and participants have advanced to regionals after a strong showing at the district competition.

Districts took place at Van Buren Technology Center in Lawrence on Feb. 1, with teams from Cassopolis competing at both the junior high and high school levels in multiple contests. Four Cassopolis FFA teams placed high enough to move onto the regional competition, and four students will be moving on based on their performance in individual events.

“I am proud of all my students for standing up and competing because it’s not always easy to compete in front of people,” said Abby Asmus, the FFA Coach at Ross Betty Junior/Senior High School. “Especially when you have a public speaking part, it can be really challenging.”

In order to advance, teams and individuals needed to place first or second in their contest. Cassopolis teams and participants that finished first are:

• The Parliamentary Procedure team, consisting of sophomores and seniors in high school

• The Greenhand Conduct of Meetings team, consisting of freshmen in high school

• Madison Suseland, a junior who competed in prepared public speaking

Teams and participants that finished in second are:

• The other junior high Conduct of Meetings team, which consists of seventh and eighth graders

• Noah Krager, a junior high homeschool student who competed in the Creed

Each contest requires the team or participant to showcase a variety of different skills that are applicable to many different jobs within the agricultural industry — not just farming.  In fact, FFA no longer stands for “Future Farmers of America.”

“The national organization changed [the name] because they felt like it was only [attracting] farmers,” Asmus said. “But they actually want it to be geared towards all agricultural careers, so it’s actually just ‘FFA’ now.”

For instance, in the job interview contest, participants provide judges with a resume, a completed cover letter, references and a completed application for an agricultural job that they could reasonably apply for given their experience and skills. Jobs that participants could pick from include a veterinarian technician, conservationist, produce manager’s assistant and others.

“Our region is very competitive,” Asmus said. “A lot of teams that do well in regionals will also do well at state. I hope that my students take what they’ve learned through competing and they are able to better themselves and use those life skills in the future. To me, it’s not necessarily about them doing well as far as where they place. We want them to go to state — that’s always the goal — but the bigger goal for me as an advisor is helping them get better at life skills so that they can use them in the future.”

Dowagiac artist reflects on what her art means to the community