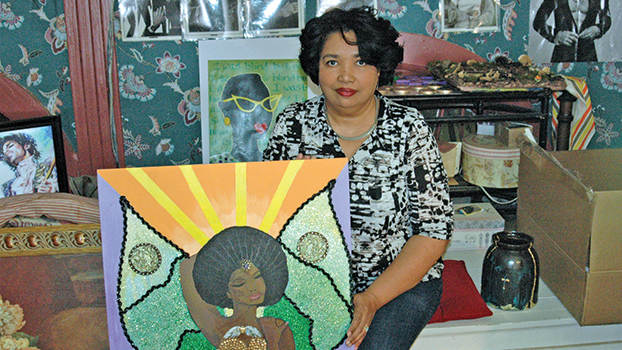 Grady poses with her favorite painting, “When She Realized She Was No Longer a Caterpillar.” (Leader photos/SARAH CULTON)

Dowagiac artist reflects on what her art means to the community

DOWAGIAC — Kandy Grady’s studio in downtown Dowagiac is an explosion of color.

Purple, blue and yellow canvases are tucked away in every corner and crevice of the small balcony space, each frame begging for attention.

“It’s a little messy in here,” Grady, 50, said, clearing a space for herself to sit. “But that’s just the artistic process.”

The African American Dowagiac native has been working professionally as an artist in southwest Michigan for four years, though she has loved art all her life. Painting is her primary medium, though she also dabbles in sketching.

In the four years since she began as a professional artist, she has shown at numerous shows including ArtPrize in Grand Rapids and at an African American exhibition, also in Grand Rapids.

Grady said she uses her art as an expression of herself, her identity and how she relates to her community.

“I consider myself a sort of visionary artist,” Grady said. “Whatever I do, it usually comes to me after I’ve given some thought as to what God wants me to do. So, almost all of my work has some sort of meaning to it.”

Though she is now a professional artist, Grady spent most of her life away from art. She grew up loving art and surrounded by artists in her family, eventually earning a one-year scholarship to study art at Southwestern Michigan College. However, life would soon get in the way. She dropped out of college after one year due to family responsibilities, and would later get married and have children that occupied her time. It was not until after her children all moved out that she pick up her passion for painting again.

“Now that I’m an empty nester, I’ve returned to art because I have the luxury of doing what I love now,” she said. “It feels amazing to be finally having success. It feels like I’m finally awake in my life. I’ve been lucky to have so much support from my family and my community.”

One of the distinguishing features of Grady’s work is the embellishments she adds to nearly every one of her pieces, from a metal hair piece attached to the head of one her painted subjects to 3-D butterflies adorning one of her frames.

“I like to use everything from gold embellishments to sequins, anything that is shiny and sparkly,” Grady said while showing off one of her favorite pieces, color painting that depicts an African American woman covered in sequins, with wings sprouting from her back.

“That piece is called ‘When She Realized She Was No Longer a Caterpillar,’” Grady explained. “She’s about how everyone woman eventually comes to the realization that they are a woman, and you’re comfortable with that and being who you are.”

“There’s not a day I can get up, now that I’ve embraced who I am, that I don’t do art,” she said. “It’s like breathing. I have to breathe, and I have to do art every day. I don’t do it for money. I feel like art is my way to give back to the world to give people understanding.”

Though she said that her identity as an African American woman does not define her as an artist, Grady said that it did affect the pieces that she creates.

“I can’t say that [my African American identity] doesn’t affect me as an artist,” she said. “That’s who I am. My art is who I am, and I am African American. That doesn’t mean my art isn’t inclusive, it is. … Everyone has their own personal journey, and no matter where my art takes me, I will still be African American.”

Aware that African Americans in the art world do face challenges and adversity, some of which she has experienced herself, Grady said she will not allow anything to hold her back from her art, so long as she continues to feel that God is calling her to work.

“You have to be true to who you are,” she said. “I don’t think you should let being African American get in the way of your dreams. Everyone has to overcome adversity.”

Grady said that she hopes that she and her work can be an inspiration to others. She has already seen the good her artistic influence can have, as her youngest daughter was inspired by her to follow her dreams of pursuing art and is now studying the subject in Orlando, Florida.

“When people see my art, I want them to see that there is still good in the world. There is compassion,” Grady said. “Anyone can follow their dreams, overcome the hardships to those dreams. … If you want to be an artist, you have to be true to yourself.”