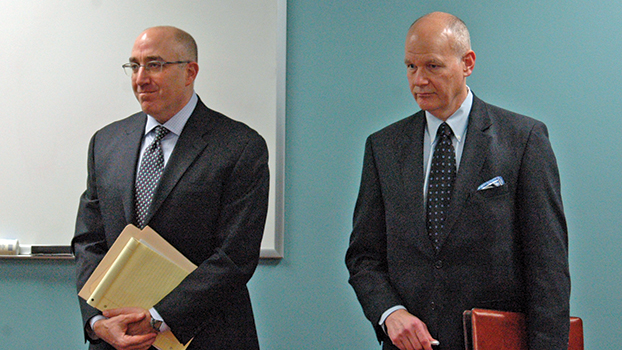 The Cass County Board of Commissioners is considering a lawsuit.

CASSOPOLIS — The Cass County Board of Commissioners is considering a lawsuit.

Attorneys Paul Novak, of Weitz and Luxenberg’s Detroit office, and Mark Bernstein, of the Sam Bernstein Law Office, presented Tuesday to the board of commissioners about a lawsuit they are currently handling on behalf of several Michigan cities and counties. The lawsuit, which looks to hold drug companies accountable for the Michigan opioid crisis, will seek to recover costs related to the crisis.

The lawsuit alleges that manufacturers and distributors of prescription opioid drugs misled doctors and the public about the dangers of opioids and that the drug companies failed to follow safeguards that would have reduced the number of people addicted to opioids.

Local governments currently participating in the lawsuit include the cities of Detroit, Lansing, Grand Rapids, Iron Mountain and Escanaba and Macomb, Genesee, Saginaw, Grand Traverse, Delta and Chippewa counties, with other counties currently considering joining the mass lawsuit, according to Bernstein.

“This is a case we believe has enormous societal and economic impact for municipalities that have been footing the bill for the opioid crisis,” Bernstein said. “The claim is for monetary damages cities and counties have expensed toward dealing with the opioid crisis.”

Winnings from the lawsuit will go toward recovering medical care, drug court, addiction treatment and law enforcement costs associated with the opioid crisis.

“The cost to each county is unique, but there are similarities across the state,” Bernstein said.

Like the tobacco case, Novak and Bernstein said the lawsuit is justified, because drug companies misled the public about the safety of their products. Because drug companies aggressively marketed opioids to doctors, the lawyers allege, doctors over-prescribed opioids, leading in part to the opioid crisis.

Injunctive relief, or a court ordered action against drug company tactics, is the primary goal of the lawsuit, Bernstein said.

“We want these companies to do business differently,” Bernstein said.

Should Cass County join the lawsuit and lose, the county will not be held responsible for legal fees, Novak said. Instead, the law firms involved will be paid a percentage of the lawsuit’s earnings, should it be successful.

Though after the presentation several commissioners were eager to vote on the matter, the board ultimately decided to hold the issue until its March 1 meeting, in order to allow County Administrator Karen Folks the opportunity to read through all the materials that Novak and Bernstein gave her.

“It seems like people are thinking favorably [of the lawsuit],” commented District 4 commissioner Roseann Marchetti Tuesday.

CASSOPOLIS — Several Cassopolis FFA teams and participants have advanced to regionals after a strong showing at the district competition.... read more