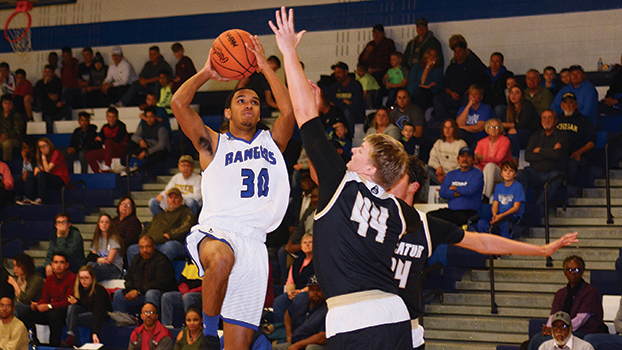 Cassopolis senior Brandon Anderson scored 12 points against Hartford Tuesday night as the Rangers remained undefeated with a 76-69 victory over the Indians. (Leader photo/File)

CASSOPOLIS — After not playing for a week due to weather cancellations, the Cassopolis boys basketball team headed back to the court for a pair of games Monday and Tuesday.

The Rangers remained undefeated on the year by sweeping Southwest 10 Conference games against Marcellus and Hartford on the road.

“I wasn’t sure how we were going to come out tonight,” said Cassopolis coach Ricky Evans following the Marcellus game. “I thought we would be a little flat because we hadn’t played in a week because of cancellation. But we came out and played very well. I was more impressed with our defense because we came out and put a lot of pressure on them. I thought our pressure gave them trouble.”

The Rangers and Wildcats were separated by just two points after one quarter, 15-13. Over the next eight minutes Cassopolis took over the game.

The game was never close again as Cassopolis poured in 20 points in the third quarter and 19 in the final eight minutes to earn the easy victory.

Tyrese Hunt-Thompson scored a game-high 30 points for the Rangers, who also got 22 points from Xander Smith and 14 points from Kiambu Gary.

Against Hartford Tuesday night, Cassopolis trailed the Indians 19-10 after one quarter, but was able to cut the lead to 31-29 by halftime.

The Rangers outscored Hartford 47-38 in the second half to pull out the win.

Trey Ackerman led Hartford and all scorers with 31 points.

The Rangers are back in action Thursday as they travel to Mendon for a Southwest 10 Conference doubleheader.

The girls game is slated to begin at 6 p.m. with the boys contest to follow at approximately 7:30 p.m.

The Cassopolis girls basketball team dropped a pair of Southwest 10 games to Marcellus and Hartford Monday and Tuesday respectively.

Against the Wildcats, Cassopolis was led by Santaja Gibson’s 16 points.

Gibson also led Cassopolis against the Indians as she scored 15 points, while Gary had nine points, Sophie Fiala eight and Kiersten Hartsell seven.

EDWARDSBURG — The Edwardsburg boys basketball team continued its upward trend in 2018 with a 66-44 rout of visiting Berrien... read more