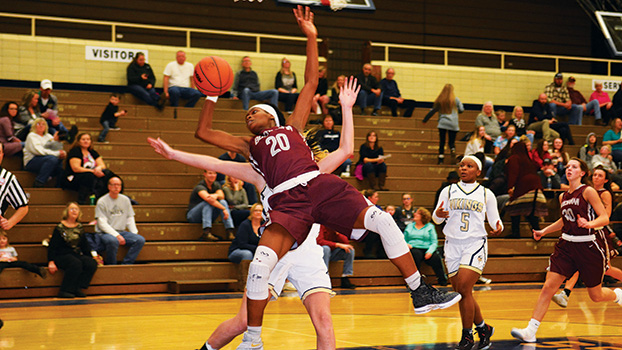 Buchanan’s Jayla Bibbs (20) is fouled on her way to the basket against Niles Monday night. (Leader photo/SCOTT NOVAK)

NILES — In a preview of the opening round of the Class B girls district basketball tournament Feb. 26, Niles fended off a second-half charge by visiting Buchanan to post a 50-46 victory Monday night.

Niles coach Jessica Johnson and Buchanan coach Gabe Miller both were hoping to learn something about their opponent before the district tournament gets under way.

“I think we better learn how to deny her (Jayla Bibbs) the basketball,” Johnson said.“

Niles got off to a fast start, grabbing a 14-5 lead on Buchanan after one quarter.

The Bucks continue to be slow starters this season according to Miller.

In the second quarter, Buchanan found its legs and behind the quickness to the basket by Bibbs, the Bucks came storming back.

Buchanan was able to draw even with the Vikings at 22-22 in the closing minutes of the first half, but a 5-0 run to end the second quarter by Niles gave the home team a 27-22 lead at halftime.

It was more of the same in the third quarter as Buchanan would close the gap and even take a 30-29 lead in Niles, only to have the Vikings pull back ahead by the end of the period, 37-36.

The Bucks had some chances down the stretch, but seemed to be playing one-on-one instead of team basketball.

“Hopefully we learned that we have to do a lot better job of playing together and executing what we worked on,” Miller said. “We are just not a good enough team to spot people a lot of points and then chase them the rest of the night.”

“We had a hard time stopping her and denying her the ball,” Johnson said of Bibbs. “She is a great athlete.”

Buchanan will travel to Berrien Springs for a BCS Athletic Confernece Red Division contest Thursday night, while Niles will host St. Joseph for its winter homecoming and a SMAC West Division game on Friday.

Granger woman to speak to youth about prescription drug misuse