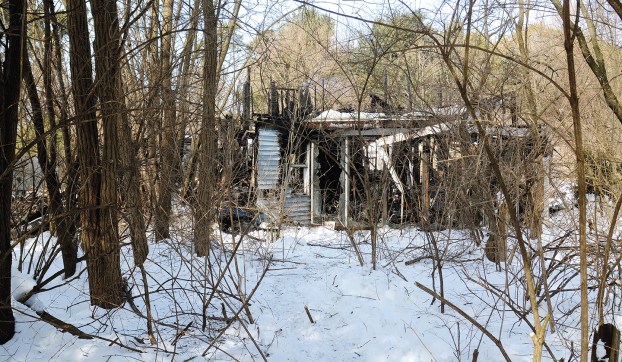 MILTON TOWNSHIP — For more than 40 years, Thomas “Jerry” and Brenda Tedder called the residence at 33064 Bertrand St. their home in Milton Township. That changed Tuesday night when a flash fire consumed the Tedders’ house, reducing it to near rubble in a matter of hours.

Authorities responded to the fire around 6:06 p.m., where they found the home fully engulfed in flames. Thick black smoke trailed above the tree line and could be spotted several miles away as the sun set Tuesday evening. Down the block, near Batchelor Drive and Bertrand Street, the crackling and popping of the fire could be heard. Police blocked off about a quarter mile of Bertrand Street and redirected traffic as firefighters battled the blaze.

Jerry, 75, and Brenda were able to escape from the home. Jerry suffered burn injuries over 25 percent of his body and was first taken to Memorial Hospital in South Bend before being transported to a hospital in Bronson, where his family reported he was admitted to a burn unit. His condition was listed as stable but serious, as of Wednesday. Brenda was checked out

at the scene and released. A Niles Township firefighter also suffered a minor knee injury while fighting the fire. He was treated at Lakeland Hospital and released.

On Tuesday night Cass County Sheriff Richard Behnke said police believed an explosion had caused the fire. However, Niles Township Fire Chief Gary Brovold said further investigation revealed that the incident was a flash fire. The cause of the fire was still under investigation Wednesday.

“State fire investigators said this is not an explosion,” Brovold said. “In an explosion, the walls are blown out. This was a flash fire. Everything went at once. Basically, everything ignited at one time.”

Brovold said the body of the fire was knocked down fairly quickly, but a major challenge was not knowing whether the electricity to the home had been turned off.

“The guys were standing at a distance trying to put water on it for a long time,” Brovold said. “That hindered our ability to get out of here sooner.”

By Wednesday morning, a few smoldering beams and sections of blackened walls were all that remained of the house at 33064 Bertrand St. A Niles Township fire engine was parked on the street with lights flashing as authorities continued to investigate. A drone buzzed overhead as it took shots of the home.

Jerry and Brenda’s daughter, Lonna Tedder, and her daughter, Tiaira Tedder, 22, of South Bend, were also among those surveying the damage Wednesday morning.

On Tuesday night, Lonna said she had been preparing for an overnight shift at a rehabilitation center, where she works as a nurse, when she got the call that her mother and father’s home was on fire.

“I’m still in shock,” Lonna said of hearing the news.

Lonna said she knows that both Brenda and Jerry worked together to get out of the house safely.

“When he fell she helped him up and he pushed her out of the house,” Lonna said.

She said Jerry and Brenda led a pretty quiet life that they liked to keep private. Jerry was a retired auto body mechanic. Lonna said Brenda is still in shock at this point.

“I don’t think it has hit her yet,” Lonna said.

Brovold said he anticipates the investigation to wrap up by the end of the day Wednesday.

Authorities across counties responded to the fire, including the Cass County Sheriff’s Department, Niles, Niles Township, Edwardsburg and Clay Township.

Niles pastor seeks to inspire others to better their community

NILES — On a hot July day last summer, volunteers for Relevant Church did not set out to escape the... read more