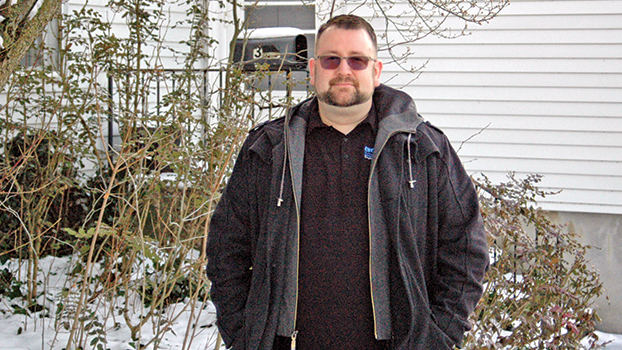 Pictured is Daniel Perrine. He is currently working on a charity album which he hopes to have released by the end of the year. (Leader photo/SARAH CULTON)

BUCHANAN — Fewer things are better than turning on the radio and relaxing to one’s favorite music, while nodding along to the rhythm. However, one local man is hoping to enhance that experience, by having that music benefit a good cause.

Daniel Perrine, owner of Redroom Productions, a production studio in Buchanan, is planning to create a charity album using his studio. The goal of the digital album would be to raise money for a charitable cause by selling the album for a donation of $5 to $10. One-hundred percent of sales would be donated to charity.

Currently, Perrine is seeking out artists to take part in the album.

“We are still in the very beginning stages of this,” he said. “We are still looking into charities that we would like to donate to.”

While he has yet to get artists or a charity to donate to in place, Perrine said that he has his eye on a few charities which he could donate to, one being an art therapy program.

Perrine said that his desire to create a product to help out charity is not just a whim coming out of the blue, but that giving is part of who he is as a person. His past charitable efforts include being the co-founder of Rock for the Cure Michiana, a concert event meant to benefit Relay for Life and other local causes. Since Rock for the Cure Michiana was started in the early 2010s, Perrine has helped host 10 events, each raising more than $1,000 for charity.

“We haven’t had one of those in quite a while,” Perrine said of Rock the Cure Michiana. “So, I really wanted to do something that got the bands of Michiana together.”

The idea for the charity album came simply from the fact that Perrine has access to recording equipment through Redroom Productions, he said.

“I thought, ‘I might as well put this to good use,’” he said. “I just had this sudden itching to find something to give back.”

Because giving back is important to him, Perrine said that he is excited to do so through music, something that he loves.

“All businesses should be out there showing they are part of the community,” Perrine said. “We all do what we can with what we can, and I have recording equipment, so I will use that.”

Though he said he still has a lot of work to go on the album, Perrine said he hopes to have it released by Christmas 2018.

“Right now, it depends how soon I can get artists together and get individuals’ recording sessions scheduled,” Perrine said. “I want to get this out and support the community as soon as I can.”