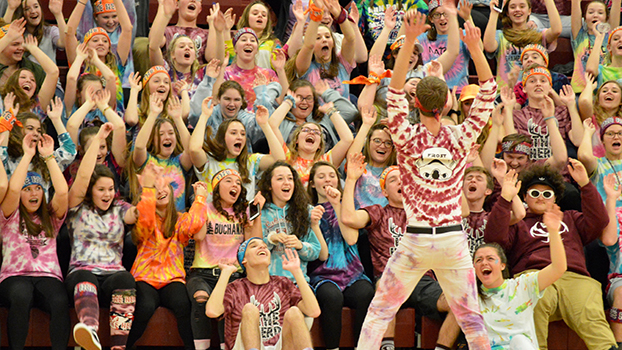 The Herd gets a visit from MHSAA on Friday

BUCHANAN — The Herd is ready to put its best hoof forward at the Michigan High School Athletic Association and its representative council visiting Buchanan Friday night.

This year, the MHSAA changed its format to make it more competitive.

There were nine semifinalists chosen by the MHSAA and its representative council. Those semifinalists then had two weeks to complete a series of 10 social media challenges, after which three finalists were selected.

Besides Buchanan, Boyne City and Petoskey were selected.

Petoskey and Boyne City were both visiting by the MHSAA Feb. 2.

The MHSAA will be on hand to observe the Herd and then a decision will be announced Feb. 23 as to who will be this year’s winner.

“The Herd has enjoyed great crowds cheering and supporting their Bucks this year,” said Rachel Carlson, one of the Herd advisors. “The Herd is proud of their positive influence and community involvement. Many students have participated in cheering, volunteering and working on overall school spirit.”

The winner, plus the other two finalists, will be recognized during the Class B boys basketball semifinal at the Breslin Center on the campus of Michigan State University March 23.

The winner will receive its championship banner.

Niles holds off Buchanan rally in preview of district opener

NILES — Host Niles held off a second half charge by Buchanan to win a non-conference girls basketball game 50-46... read more