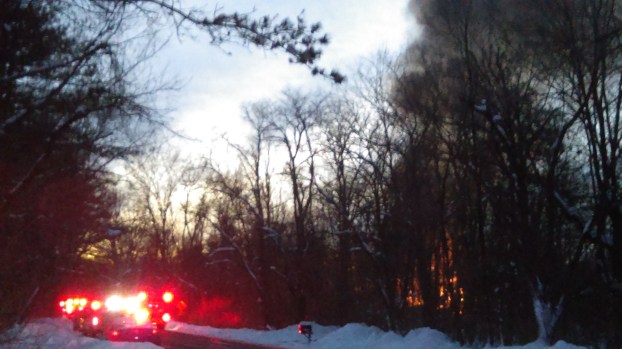 One injured after house explosion and fire in Milton Township

MILTON TOWNSHIP — The Cass County Sheriff’s Department is investigating a home explosion in Milton Township that injured one and started a fire at the residence.

Police responded to 33064 Bertrand St. around 6:06 p.m. after neighbors reported hearing what sounded like two explosions, before the house caught fire and was fully engulfed in flames.

Cass County Sheriff Richard Behnke said authorities do not know at this time what caused the explosion.

“We are not sure what started the explosion, whether it was gas, propane — we do not know at this time,” he said.

A husband and wife were inside the home when the explosion and subsequent fire occurred. The husband sustained burn injuries and was taken to by SMCAS ambulance to Memorial Hospital in South Bend. The wife was also taken to the hospital for an unrelated medical issue.

“The husband came out of the house with some burns on him,” Behnke said. “He was conscious at the scene and told people that there was no one else in the house.”

At about 6:20 p.m. the flames could be seen about a quarter of a mile down the block near Batchelor Drive and Bertrand Street. Thick black smoke billowed above the tree line. Behnke said the home is likely considered a total loss.

At about 7:45 p.m. Behnke said authorities were still treating the area as an active fire scene, because the electricity had not been turned off. He said he was not sure how long authorities would have to remain on the scene.

The road was blocked off for about half of a mile starting at Batchelor and Bertrand streets. In a situation involving explosions, Behnke said it was important to establish safe parameters.

“We worked to keep the scene safe,” Behnke said. “That’s what we do as police.”

In addition to the Cass County Sheriff’s Department, firefighters from Niles, Niles Township, Edwardsburg, Clay Township responded to the scene.

Granger woman to speak to youth about prescription drug misuse