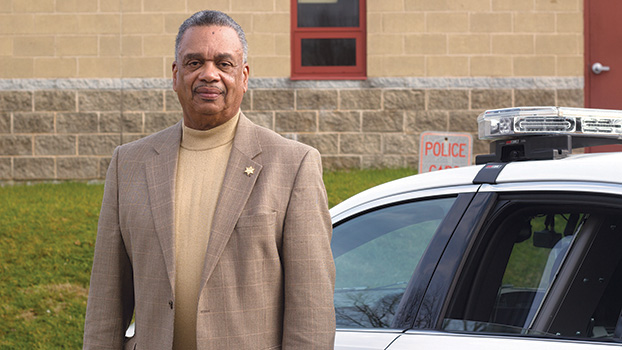 CASSOPOLIS — While most people of Cass County endured a withering and intense snow storm Friday, former Sheriff Joe Underwood was soaking in the Florida sun.

“Oh man, Michigan winters,” Underwood cackled during a phone interview Friday. “I certainly don’t miss those. That’s why we spend our winters in Florida now. I hope the weather is better up north when we come back in the spring.”

Though he may fly south for the winter now, Underwood spent 24 winters dutifully serving the people of Cass County in a career he said he was grateful to have had.

Joe Underwood, 70, of the Cassopolis-Dowagiac area, served as the first African American sheriff in Cass County from 1993 to 2016. Now looking back on his two decades in the sheriff’s office, Underwood said that the way to win over a community and be successful in an elected position is to listen to constituents, always give your all to them and, most importantly, follow through on promises.

“It’s collaborative,” Underwood said of being sheriff. “It was always about what can we, the community, accomplish together.”

Underwood got his start working his way up through the Dowagiac Police Department and the Cass County Sheriff’s Office, eventually becoming the undersheriff, under former Sheriff Jim Northrop. When Northrop retired in 1988, Underwood was selected to finish out his term. When the time came for a new sheriff to be elected, Underwood ran — and lost.

Feeling the sting of that loss, he went to work at a Ford dealership in Dowagiac. However, Underwood could not be kept from law enforcement for long, as four years later, in 1992, he once again threw his hat in for the sheriff’s position, this time walking away with a victory.

“That took a lot of soul-searching and thought, because once you go through an election process and lose, that’s not something you really want to do again,” he said. “But I found out there some people out there who really wanted to support me, so we gave it another shot. So, on Jan. 1, 1993, I became the sheriff of Cass County.”

It was during the 1992 campaign for sheriff that Underwood learned the importance of keeping promises to his constituents. One of the main platforms of his campaign was returning 24-hour road service to the county, something that he followed through on when he took office. He also went around to many of the townships in the county to ensure that residents were being heard.

“I think when people look back at what we did, I don’t think people think we bit off more than we could chew,” Underwood said. “We identified a few things that were important to people and worked really hard to figure out how we could accomplish those things. So, when our four years were up, and it was report card time, we came back with a good report, and for the next five elections, we won.”

Underwood said he continued to keep his promises to the public for the entirety of the time he served as sheriff.

“I guess I didn’t really look at myself as the first African American sheriff of Cass County,” he said. “I more thought of, being in law enforcement, what impact can I make on the county? It wasn’t about me. I was about the county.”

Underwood said that the success of his term as sheriff can be put down to the support of the residents of Cass County, and everyone who worked with him to accomplish the initiatives he set out.

Though he is now retired and spends his winter days in the southern United States, Underwood said he is still strongly connected to Cass County, coming back every spring, and is still invested in seeing the community grow and flourish.

“I think in the future, I would like to see Cass County continue what it has been doing,” he said. “I want to see everyone continue to work together to make this a great place to live.”

DOWAGIAC — The best part of Jennifer Davis’ day is seeing the different animals that are brought into the store... read more