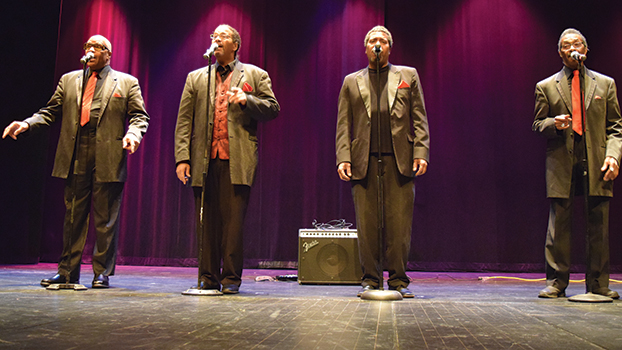 Despite seamless harmonies which made The Spaniels doo-wop pioneers, three men singing with Billy Shelton each bring their own accomplishments.

Patrick Pitre is reknowned for incredible range, from falsetto to bass.

Gene Stewart is enshrined in Cleveland’s Rock and Roll Hall of Fame.

They performed 1966’s “Get Ready” in tribute to Temptations lead singer Dennis Edwards, who died in Chicago on Feb. 1, at 74, and 1960’s “Chain Gang” in tribute to Sam Cooke and The Soul Stirrers, with whom Stewart was inducted into the Rock Hall in 1989.

“Gary was a gospel town and the last boomtown with the largest steel mill in the world. People came from all over America for good jobs. Pookie, who came from Iowa, was related to Fats Waller and Josephine Baker.”

Vee Jay, the African American-owned Chicago label which preceded Detroit’s Motown, formed to record The Spaniels, discovered The Beatles ahead of Capitol and signed The Four Seasons.

Shelton’s family lived over a bar, but he “grew up in church. We had a spiritual basis. My dad, grandmother and grandfather were preachers.”

Shelton knew The Flamingos, best known for 1959’s “I Only Have Eyes for You,” from church.

He claims 80 years as a professional musician because he sang for change perched atop a soapbox during the Depression, filling his piggy bank with more than $100.

“He’s so old he was a waiter at The Last Supper,” Pitre quipped.

Comparing his era to contemporary technology, Shelton said, “In the old days, you couldn’t hide by punching a button. You had to really sing.”

“The original Spaniels recorded standing around one microphone,” Pitre said. “There was no punching in if you messed up. You started over.”

“You rehearsed until you made sure you’ve got it from start to finish before going into the studio,” Shelton said. “Once that meter starts ticking, it’s coming out of your pocket.”

Shelton told SMC choral students interested in breaking into the business, “You have to believe in and love what you’re doing. I don’t know of any singer or musician who got into it to make money. The only job you can have where you start at the top is digging a ditch. Bruno Mars made millions last year, but I’m sure he didn’t think about that when he started.”

Shelton’s nieces followed him into the business. As The Emotions, the Grammy Award-winning Chicago trio released “Best of My Love” in 1977.

“Rhythmic cadences saved them trying to pick 500 pounds of cotton in 100-degree weather,” Shelton introduced “Keep Your Hand on the Plow.”

“We couldn’t go in the front door” at New York’s Radio City Music Hall. “We had to go around back to perform as stars. If we got hungry on the road while traveling, we couldn’t eat in restaurants. If they served us anything, it had to be to-go. Harry Belafonte did a lot to equalize Las Vegas, which had no dressing rooms for black entertainers. The Ink Spots changed into white tuxedos in the men’s room.”

Chicago’s Edgewater Beach Hotel security barred Belafonte from entering to perform. “When his contract ran out in Vegas, he insisted there be a dressing room for black entertainers. Thank God, things are different now. Black people have depended on good people like you who picked right above wrong and helped us get our freedom, like the Underground Railroad,” Shelton said.

They closed with their 1954 signature, “Goodnight, Sweetheart, Goodnight,” covered by The McGuire Sisters and Sha Na Na and featured in movies “American Graffiti,” “Three Men and a Baby,” “Diner” and “American Hot Wax.”

“The Spaniels didn’t like (Hudson’s) song when they recorded it,” Shelton said. “But I’m beginning to. We’ve got a show coming up with The Platters. We’re going to show them they made a big mistake” by passing over Pitre.

Alpha Kappa Omega Bible Study Club and SMC’s Diversity Committee co-hosted the program in the theatre of the Dale A. Lyons Building on the Dowagiac campus.

DOWAGIAC — Southwestern Michigan College is adding a third opportunity for students to earn honors distinction while at the college.... read more