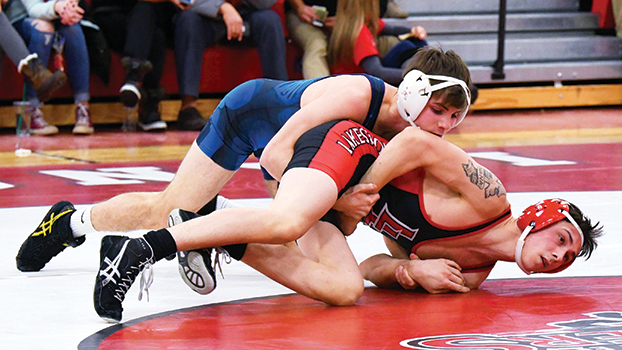 CONSTANTINE — Area wrestlers turned in solid performances at the Division 2 and Division 3 individual districts in Constantine and Battle Creek on Saturday.

Niles led the way with 11 regional qualifiers, while Edwardsburg and Dowagiac each advanced six wrestlers to Saturday’s regionals in Vicksburg and Fremont.

Brandywine and Buchanan had three and two wrestlers respectively qualify for the next round of the state tournament, while Cassopolis’ Dylan Green and Zach Wilkins both advanced to the Division 4 regional at Lawton.

Franco, a three-time state placer, improved to 37-0 with a major decision (16-4) over Nick Buchanan of Coldwater in the championship match.

Eger was the lone area champion in Division 3 as he decisioned Coloma’s Ian Ishmael 7-5 at 135 pounds.

Finishing second were Brandywine’s Hunter Heath at 112, Dowagiac’s Kody Walker at 119 and Brandywine’s Steven Kendall at 130.

“Overall, I feel like we wrestled very well,” Dowagiac coach Colin Burandt said. “Six got through and two got close.

Burandt will now get his team ready to face Coloma in the Division 3 team regional at Lake Odessa on Wednesday before preparing for the individual regional.

“We just need to stay focused,” he said. “We need to manage our weights and keep that momentum moving forward.”

Green finished as the runner-up at 152 pounds as he was defeated by Ethan Lopresto of Reading 3-2.

Wilkins finished third by pinning Carter McKibbin of Reading in 2:29 at 145 pounds.

The regional tournament will be hosted at Hudson Saturday.

NILES — A Niles optometrist who recently retired from the Niles Vison Clinic was recognized last week by the Michigan... read more