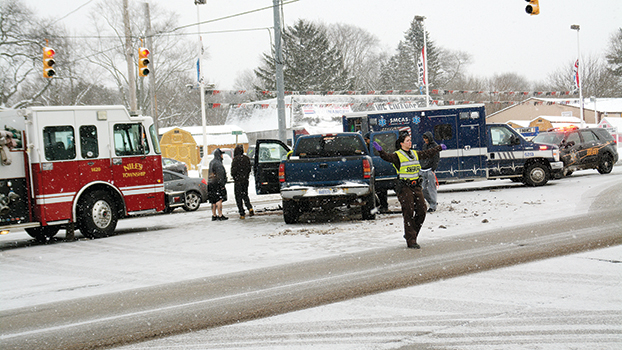 NILES TOWNSHIP — Two teens were hospitalized with minor injuries after a car crash Wednesday evening at the intersection of S. 11th Street and Fulkerson Road in Niles Township, according to the Berrien County Sheriff’s Department.

The accident occurred about 5:20 p.m. when a pickup truck driven by a 17-year-old that was carrying three passengers was traveling southbound on S. 11th Street. According to Berrien County Sheriff Department Lt. Fred Laesch, the pickup truck ran the red light, colliding with an eastbound box truck that was passing through the intersection on a green light. The box truck was carrying two passengers, who were uninjured.

Laesch said the 17-year-old and a 15-year-old passenger of the pickup truck were transported by SMCAS and Edwardsburg ambulances to Memorial Hospital in South Bend with minor face, head and back injuries. The 15-year-old was the only person involved in the accident who was not wearing a seatbelt, Laesch said.

Laesch said police are currently investigating the accident and trying to determine whether the pickup truck was experiencing a mechanical problem that could have caused the collision. Snowfall and slippery conditions are also being considered as potential factors in the crash.

Authorities shut down part of S. 11th Street for about half an hour as they worked to clear the scene. The Niles Township Fire Department, Berrien County Sheriff’s Department, SMCAS and Edwardsburg ambulance responded to the scene.

NILES — The food pantry shelves at the Niles Salvation Army are looking sparse, after an increase in need from... read more