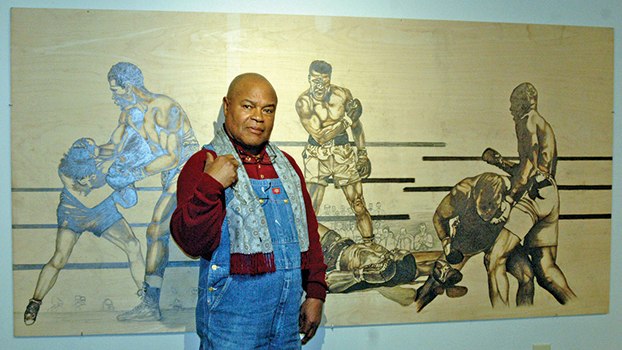 DOWAGIAC — Just up the stairs of the Dowagiac History Museum is a small room with plain white walls and little in the way of furniture, aside from a simple bench.

However, for the month of February, those white walls will be adorned with large, intricate wood-burned pieces of art depicting African-American history. One image is of Frederick Douglass and Martin Luther King Jr. standing among several other civil rights leaders. Another depicts boxer Muhammad Ali at the moment of a victorious knockout.

From 4 to 6 p.m. Wednesday, the museum hosted an open house for the exhibit, which featured Collins working live, on-site on a new work of art.

Collins, 68, of Dowagiac, has been working with wood burning for 40 years. He got started with the medium after seeing a small, simple burning of a deer in an art store and got inspired to teach himself the skill. Today, he can create large, intricate works, sometimes spending more than a year on a picture.

Initially, he worked primarily on images of landscapes and buildings, but has more and more moved into works that depict African-American history.

“I see all these beautiful pictures and beautiful photography that inspires me to turn it into a burning,” Collins explained as he burned the details into an image depicting former President Barack Obama staring out the window of the Oval Office using a long, silver wood burner. “A lot of those photos are of black history.”

Collins said that he often tours his work during Black History Month, going as far the southern United States. However, he said that he was happy to keep his art at home this year with the Dowagiac History Museum.

“This is the first time I’m doing it here, and I’m excited to do it here,” he said.

Because of the opportunity to share his artwork with others and educating the people of Dowagiac about African American history, Collins said he was proud to have been asked to be a part of museum special exhibit.

“A lot of people don’t know about black history, period,” he said, getting up to walk around the room and tell the history of several of his works. “I want people to see [African American history] in my work, to be able to walk away with something. Each picture tells a story, depending on what piece it is. There is so much history to tell in these pieces.”

As museum director, Arseneau also hoped that people would walk away from Collins with a sense of African-American history.

“Civil rights was something that happened 50, 60 years ago, and unfortunately, some people are forgetting how important that was and that not everyone had equal rights,” he said. “It’s important for us to remember that.”

Collins will be back in the museum to work live on Feb. 21.