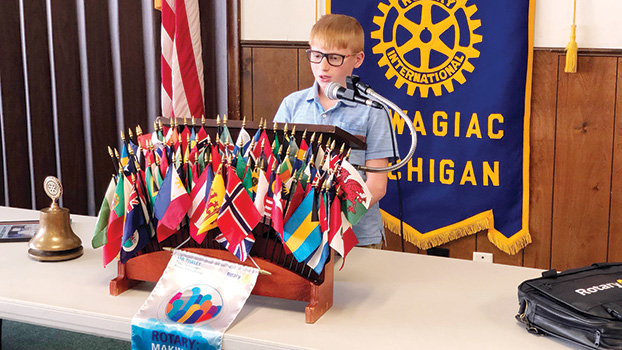 DOWAGIAC — In spite of the constant turmoil surrounding FISA memos, special councils and other intrigues consuming the nation’s capital these days, one Dowagiac student still recognizes the undying principle on which the United States was founded nearly 250 years ago.

Dowagiac Middle School seventh-grade student Abraham Guernsey visited the Dowagiac Rotary Club during its weekly meeting at the local Elks Lodge Thursday, where he read his award-winning essay, “Freedom: America’s Gift to My Generation,” to the members in attendance. Retired Cassopolis educator and longtime Rotarian Barbara Groner invited Guernsey and his parents to lunch that afternoon, along with Ann Biek. president of the local VFW Women’s Auxiliary.

Guernsey’s writing was recently awarded the first-place prize in the VFW’s annual Patriot’s Pen contest. The seventh-grader, like other middle school students across the U.S., was asked to write an essay based around the theme of “America’s Gift to My Generation” for the contest.

Biek, who attends the same church as Guernsey and his family, asked him to pen an entry for the essay contest several months ago, as she knew that he liked to write, she said. It was his first time he submitted something for the contest, he said.

For his win, he received a $50 scholarship, Biek said.

Guernsey’s older brothers entered the Voice of Democracy essay contest at Dowagiac Union High School, the counterpart of the Patriot’s Pen contest. Lake Michigan Catholic student Will McCoy was judged the first-place winner in that contest, who went on to win the VFW District 7 essay and took fourth place at state, where he received a $1,500 scholarship.

Guernsey is also a member of the Boy Scouts. He said he would like to become a computer software engineer, when asked by one of the Rotarians what his future ambitions are.

The Guernsey’s essay is as follows:

The first three words in the preamble are “we the people.”

This means us: us as people, and us as citizens of the United States.

Freedom is what America gives to my generation.

We have the freedom to speak. We cannot say whatever we want, because we have certain limits: for example, a person cannot say fire in a place where people [gather].

This really helps me, because I do not have to worry, unlike a kid living in a dictatorship, where people cannot say what they want but are told what to say and when to say it.

Freedom is why I am thankful to live in the United States.

Freedom of the press

This really helps me, because if I couldn’t, then I wouldn’t have been able to write this exact essay, so thank you.

Also, if we didn’t have freedom of the press, we have to live like kids in dictatorships, who are told what to write, how they can write it and where they can write.

We have the freedom to assemble at any public place, meeting or event.

Freedom is the reason that all citizens of the United States can live and not be told what to do all the time, or even how to do it.

Freedom is America’s gift to my generation.