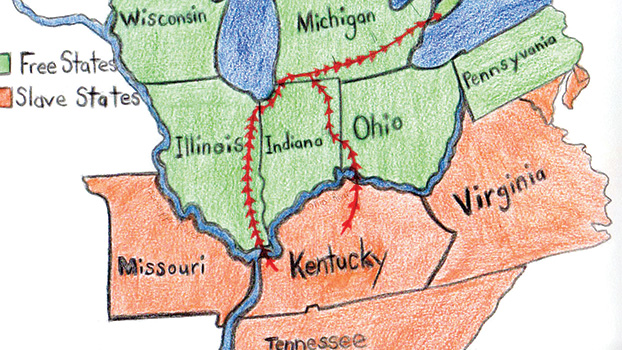 A hand drawn map of the routes that escaped slaves used to travel to North on the Underground Railroad. Escapees, known as Freedom Seekers, would stop at various places throughout their flight on their way to Canada. (Artwork courtesy of Cindy Yawkey)

The Underground Railroad in Cass County — Part I

VANDALIA — While far removed from the plantations of the slavery-era South, Cass County played an important role in the history of the abolitionist movement during the mid 1800s.

The stories of the escaped slaves and those who harbored them during their flights North toward freedom have been documented and preserved by the dedicated members of the Underground Railroad Society of Cass County.

In celebration of Black History Month this February, Cathy LaPointe, treasurer and founding member of the URSCC, will feature a series of four articles that highlight the story of the Underground Railroad in Vandalia and other local communities.

The Underground Railroad existed from 1830 to 1860, and was neither underground nor a railroad.

Rather, it was a series of houses, barns, cellars and other hiding places that were stops for fugitive slaves on their journey north to freedom in Canada.

Rail transportation was becoming popular in the early 1800s. The story goes that a runaway slave, now called a freedom seeker, was being pursued by slave catchers. They crossed the Ohio River in boats, and the freedom seeker jumped out and ran into the busy streets of Cincinnati.

The slave catcher quickly lost sight of him and reported that it seemed like he jumped on an underground railroad.

The routes that freedom seekers followed north were called lines. The places where they hid were called stations.

Canada outlawed slavery in 1833, and became a beacon for freedom seekers everywhere.

Escape from the deep south slave states was almost impossible. Most freedom seekers journeyed north on hundreds of lines from the border slave states of Kentucky, Virginia, North Carolina and Tennessee through the free states of Illinois, Indiana, Ohio, Pennsylvania, New York and Michigan, crossing into Canada at various sites. It is said that between 50,000 and 100,000 freedom seekers escaped bondage by 1860, many on the UGRR.

Anti-slavery abolitionists of all races and religions participated in the Underground Railroad.  Quakers were the first to declare slavery a “sin against man and God,” and freed their slaves in the late 1700s. Many moved to free states to escape slavery, and freedom seekers often followed them.

There was a large settlement of Quakers in Wayne County, Indiana, many of whom moved into Cass County, Michigan, around 1830, settling in Penn, Porter and Calvin townships, known as Young’s Prairie.

Some of them became part of the Quaker Line of the UGRR. Freedom Seekers crossed the Ohio River at Cincinnati, were taken by conductors to stations along a route to Wayne County up to Bristol, Indiana, to Vandalia. Another route was called the Illinois Line.

Freedom Seekers crossed the Ohio or Missouri Rivers, and traveled north through Illinois to Chicago to Niles and into Vandalia. Well known UGRR stations and stationmasters in the area around Vandalia were the homes of Stephen Bogue, William Jones, Ishmael Lee and the Carriage House of James E. Bonine.

Conductors Zachariah Shugart and African American Henry Shepard took freedom seekers to the next station, the home of Dr. Nathan Thomas in Schoolcraft.  From there, they continued their journey to Battle Creek, then stopped about 20 miles apart until they reached Detroit, where they crossed the Detroit River into Canada.

It is said that more than 1,500 freedom seekers came through Vandalia on the Underground Railroad.

Unfortunately, slave catchers were not far behind.