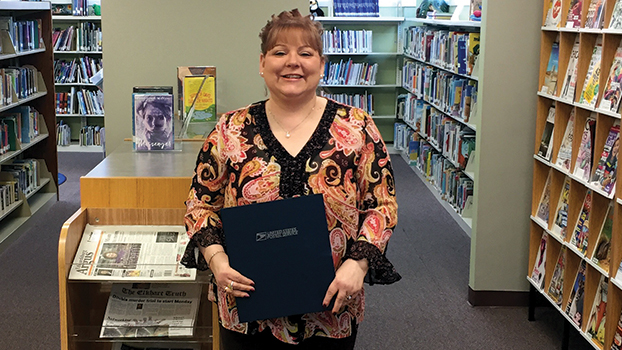 Ginger Jackson holds her letter from the post office, congratulating her for her “well-deserved” retirement. (Leader photo/ANDREW MENTOCK)

CASSOPOLIS — Sometimes, life happens fast. Just three weeks ago, Edwardsburg’s Ginger Jackson, 53, was in the midst of her 27th year as the window clerk for the Cassopolis Post Office when she got a notice that she was eligible for early retirement. The sentimental Jackson knew that, if she were going to leave, she would need it to happen quickly — with no time to plan a big party or a poignant retirement ceremony.

“I just made my decision,” Jackson said. “I thought it would be too hard to wait to get out. I had been there for so long.”

She accepted the offer for early retirement. On Jan. 31, she had her last day with the post office, and is now onto her next adventures.

“It’s a little overwhelming. It just seems unreal,” she said, with tears in her eyes. “Never in a million years did I think I would retire right now.”

A major factor in her decision to accept early retirement was so she could spend more time caring for her mother, who is currently in remission from lung cancer.

Jackson also had a health scare herself this past September, when doctors thought she might have lymphoma. Luckily, she did not, but that experience reminded her of how short life is — that she is not promised tomorrow.

“I felt like the post office has been my whole life, just about, and I’m ready to start a new life,” she said. “But I love all my customers. It’s been absolutely fantastic. I couldn’t have worked for a better place, a better community.”

The staff at the Cassopolis Post Office feels the same way.

“She will be missed,” said Karen Dodd, the postmaster at the office in Cassopolis. “She was my daily entertainment. We always joke about that. She would [often] make me laugh with her comments.”

Now that she is retired, Jackson plans to travel a lot more, and spend time with her family and friends.  She already has trips to Tennessee, Las Vegas and Alaska scheduled, and she has tickets to concerts such as Blake Shelton in Grand Rapids and Harry Styles in Indianapolis.

“I really intend to go to a lot more concerts,” Jackson said. “I go to a lot anyway. I’m not kidding you, I go to at least one concert a month, and I am going to increase that now, believe it or not. I also go to the casino, but I don’t think that I will increase that.”

She also hopes to spend more time pursuing some of her passions. For years, she has loved to write short stories and essays, but, with a little more time on her hands, she is contemplating writing a memoir.

However, she does not expect to be without employment for too long. She likes to work and keep busy, so she is open taking another job, just as long as it allows her the flexibility to still look after her mom, she said.

Throughout her time with the post office, she worked an assortment of side jobs, such as in-home healthcare and at Subway. Currently, she drives for Lyft and Uber, which she has been doing for the past year and a half.

Even though Jackson has retired from the Cassopolis Post Office,  her life already seems to be moving fast, and not even she knows exactly what she will be doing next.

The only thing she knows for sure is that she will be taking care of herself, her mother, spending time with family and friends, and enjoying whatever adventures come her way, she said.

BUCHANAN — Tables are still available for teams of people looking to put their trivia skills to the test and... read more