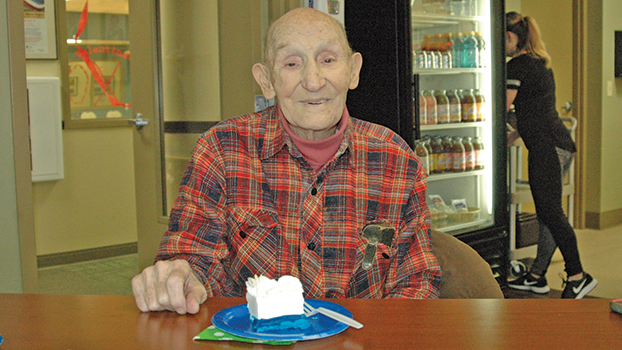 DOWAGIAC — Wednesday morning, a group gathered in the Council on Aging’s Front Street Crossing location patiently waiting for its guest of honor to arrive, while a sign saying, “Thank you, Bob,” hung from one wall above a festive cake bearing the same sentiment.

“They’re pulling up,” said one excited individual, glancing out the window.

As 93-year-old Dowagiac resident Bob Barton walked through the door, the group broke into applause, and cameras started flashing, capturing the moment.

Barton, caught by surprise, took a moment to take in the scene.

“How did you all even know I’d be here?” Barton asked, bewildered. “This is wonderful.”

The event was a surprise party for Barton, as he was retiring as a volunteer for the COA. Barton volunteered at the COA for 22 years, first starting at the Cassopolis Lowe Center, before moving to the Front Street location in Dowagiac.

“To volunteer for 22 years, that’s dedication,” said Trish Proctor, a fitness room instructor at the COA. “He’s just an amazing person. He’s such an unassuming, kind person, who has done so much for us.”

Proctor said she has become good friends with Barton after working with him for more than 12 years. She said that she could not think of a person more deserving of a celebration than Barton.

“He’s so important to everyone here. I’ve never seen him mad a day in his life,” Proctor said. “He’s just an upbeat person. He’s just a pleasure to work with.”

Barton, a purple-heart World War II veteran, said he was grateful for the party his colleagues threw for him.

“I was so surprised,” he said. “I had no idea they were doing this. It was really nice that they set me up.”

Though he is retiring due to his age, Barton said that it has been his pleasure to volunteer for the COA for the past two decades.

He started volunteering after he began taking aerobics lessons at the Lowe Center facility. He said that his favorite part of volunteering was spending time with people and seeing them enjoy the classes they were taking.

“You go in and have fun,” he said about volunteering. That is what makes it worth it.”

“Be kind-hearted to everyone just like he is. “That would be my advice for volunteers,” she said.

Proctor added that everyone at the COA would miss Barton greatly, saying that she was heartbroken when Barton told her he could no longer volunteer.

“I’m sad, but it doesn’t end here. … We will visit him and he will come here for lunch sometimes,” Proctor said. “We are not saying goodbye. It’s never goodbye. We are just going to see him not quite as often as we are used to.”

Barton also said that he would miss the COA and the people there, as well.